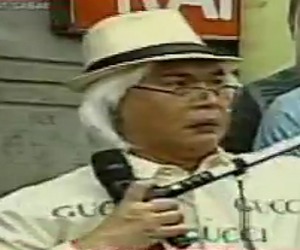 foe or an enemy of Yaya Dub? We have to find out.

Staunch viewers of the popular noon time show will have added

Even before the success of Kalye Serye’s Aldub which catapulted

its creation a year before.

In the last episode of kalye Serye, Alden Richards manifested

in turn reciprocated by wiping his sweat.

Lola Nidora meanwhile was consistent in preventing the two

from manifesting their sweetness.

Today’s hashtag #AlDubHihintayinKita became one of the top

was furious that the marriage between Frankie Arinolli and Yaya

Lolo Franing wanted to know the reason why the marriage was

Lola Nidora meantime will give a challenge to Alden Richard

contained in a box which viewers will know in tomorrow’s

Aldub fever is everywhere in the Philippines. In Rizal

Technological University in Pasig, Every episode of Kalye

shown due to the substantial number of students watching.