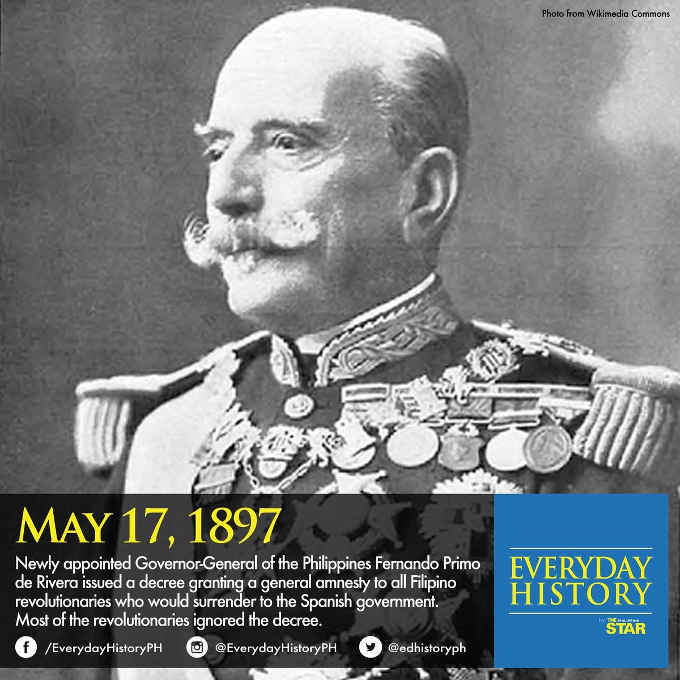 On this day, May 17, in 1897, newly appointed Governor-General of the Philippines Fernando Primo de Rivera issued a decree granting a general amnesty to all Filipino revolutionaries who would surrender to the Spanish government.

Most of the revolutionaries ignored the decree, prompting Rivera to launch a major offensive against them in Cavite. Emilio Aguinaldo, President of the Revolutionary Government, was forced to retreat his forces to Batangas and establish a new headquarters in Mount Puray, Morong.

The surrender of Taruc became possible after a year of negotiations facilitated by Manuel Manahan and Benigno Aquino, Jr. They were appointed by President Ramon Magsaysay for the said mission.

At the time of his surrender, Taruc was already suspended by the Partido Komunista ng Pilipinas (PKP) and was removed as head of the PKP Military Committee (administrating the communist armed group Hukbong Mapagpalaya ng Bayan or HMB). This was after he called for peace in 1953.

Due to rebellious nature, PKP was outlawed before World War II. In 1938, PKP merged with Sosyalistang Partido ng Pilipinas, headed by Pedro Abad Santos, Taruc’s mentor in Pampanga and a veteran of the Philippine Revolution and a champion of the peasants in Central Luzon.

They operated under the name “communist” party, which confused people that Pampanga was ‘communist’ (i.e., guilty of sedition and rebellion) rather than ‘socialist’ (i.e., Kapampangan members still exercised freedom of religion as it was essential in their culture; a number of their members had positions in the Pampanga provincial and municipal governments either as mayors, vice-mayors or councilors; Abad Santos maintained cordial relations with the government).

In 1942, the merged parties established the Hukbo ng Bayan Laban sa Hapon (Hukbahalahap) with Taruc, Abad Santos’ protegee, as the head. After working for the liberation of the Philippines from the Japanese, communism was the next threat the Philippine government dealt with.

In 1946, Taruc won a seat in the House of Representatives, only to be nullified and accused by then-President Manuel Roxas of terrorism and election fraud. In that year, Taruc went to the mountains and became an insurgent.

In 1950, Hukbalahap was transformed into HMB. Taruc remained an insurgent leader until he was disowned by his own comrades and eventually surrendered to the government.

Taruc was tried in August 1954. Pleaded guilty, he was sentenced to twelve years of imprisonment and a huge fine. He was later pardoned by President Ferdinand Marcos in 1968. He died in 2005.

With 15.514 Filipinos as of Dec. 2017, PH has an Embassy in The Hague and Honorary Consulates General in Amsterdam and Rotterdam.