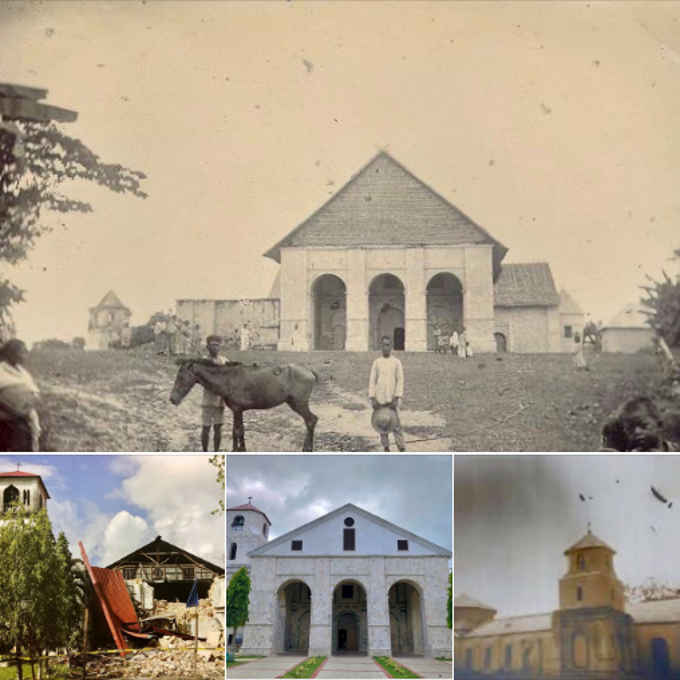 The Sto. Niño Parish Church Complex in the town of Cortes, about 10 km. from Bohol’s capital, Tagbilaran, was constructed atop a cliff overlooking the Abatan River delta.

Note: A delta is an area of low, flat land shaped like a triangle, where a river splits and spreads out into several branches before entering the sea.

A river delta is a landform created by deposition of sediment that is carried by a river as the flow leaves its mouth and enters slower-moving or stagnant water. This occurs where a river enters an ocean, sea, estuary, lake, reservoir, or (more rarely) another river that cannot carry away the supplied sediment.

From its vantage point, it commands sweeping views of the delta below as the river empties into the Maribojoc Bay. A strategic defensive location against attacks from marauding pirates.

The parish was under the helm of the Agustinian Recollects from its founding until the end of the Spanish colonial rule.
According to church historian and expert in Catholic church art and architecture in the Philippines, Regalado Trota Jose, an earlier church built of Tabique Pampango walls with nipa roofing existed in Cortes.

Work on the current stone church began in the late 19th century until the early 20th century. The upper part of its pre-earthquake bell tower was constructed with reinforced concrete and shared a similar architectural style as the mid-20th century church in Batuan, Bohol. The interiors feature an exquisite main retablo in Baroque and Renaissance style, and extensive Ceiling Paintings installed in the 1920s by Raymundo Francia.

The church was declared National Cultural Treasure by the National Museum of the Philippines in 2013 for its intact quality with historical, cultural, and artistic significance. This timely declaration of a significant cultural property allowed for the government to step in and restore the church after it sustained serious damage due to the 2013 earthquake.

Restoration work on the church was undertaken by the National Museum and was started in 2017. It was completed and turned over to the Diocese of Tagbilaran on January 16, 2020.