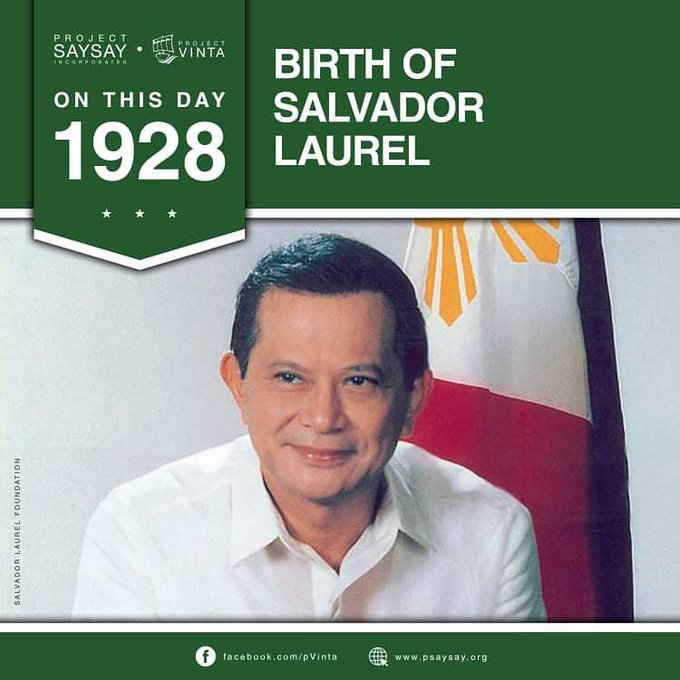 On this day, November 18 | @ProjectSaysay

On this day November 18, in 1928, politician Salvador H. Laurel was born in Paco, Manila to Jose P. Laurel, who served as the President of the Second Philippine Republic, and Pacencia Valencia Hidalgo.

A noted opposition leader during the Marcos dictatorship, he ran as vice-president to Corazon C. Aquino during the 1986 Snap Elections and won.

Doy, as he was fondly called, earned his law degree in 1952 from UP. While studying law, he married Celia Diaz, granddaughter of Domingo Franco, one of the martyrs of the Philippine Revolution and Filipino Independence, with whom he had eight children.

He spent his law practice with the Citizens Legal Aid Society of the Philippines (CLASP), an organization he founded offering legal aid to the indigent. For a time, he also taught law courses at the Lyceum of the Philippines which his father founded.

He won a Senate seat in 1967 and served as a member of the Philippine Delegation to the UN General Assembly. He ran for reelection in 1971 but his term was cut short with the imposition of Martial Law the following year.

Despite being a friend of President Ferdinand Marcos, he spent his time mobilizing a united opposition bloc. He founded the United Nationalist Democratic Organization, a known political opposition.

Despite his desire to run for the presidency against Marcos, he gave way to Corazon Aquino. He instead ran as her vice president. He later resigned from the Aquino administration due to political differences.

He ran for President in 1992 but lost to Fidel V. Ramos, who later appointed him as Chairperson of the National Centennial Commission (NCC), tasked to prepare the country in celebrating the 100 years of Philippine independence in 1998.