I hear a lot about this TRAIN package 2. So I decided to read about it and find out  for myself what it is.

TRAIN is an acronym. It simply means Tax Reform For Acceleration and Inclusion.

TRAIN is a law. It is a tax law and not a form of rail transport like MRT or LRT.

There is a law called TRAIN Law package 1. It took effect this year, 2018. 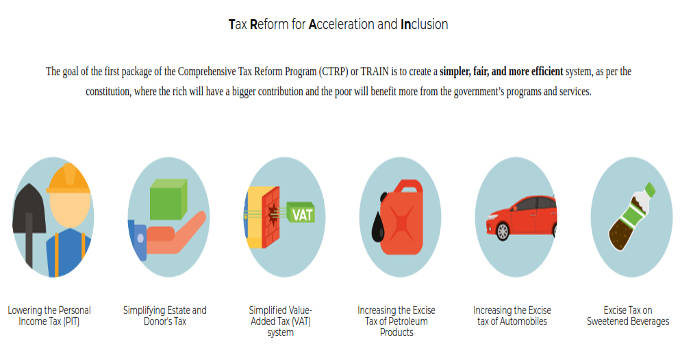 This TRAIN law package 1 simply did the following:

The purpose of the government in doing this is to help the low-income Filipino workers increase their take home pay by paying less income tax or no tax at all.

The Tax Law is also intended to raise additional revenues through the repeal of several  non-essential exemptions to the value added tax (VAT), adjustments in the excise tax  rates for fuel, coal and automobiles and tax on sugar sweetened beverages among  other measures.

These additional revenues can be used by the Philippine government for infrastructure and social services.

TRAIN Package 2 is not a law. Not yet.

Not yet in the sense that it is just a bill passed in the congress of the Philippines.

A bill becomes a law only when it passes the congress of the Philippines and signed  by the President.

What is the aim of this TRAIN Package 2? What will it do once it becomes a law?

TRAIN Package 2 will basically lower the corporate income tax. You know, those taxes paid by corporations.

TRAIN 2 intends to lower the corporate income tax rate from 30 percent to 25 percent.

The Philippine law makers hope to pass the TRAIN 2 package within the year.

The Philippine government is making this tax reforms to achieve the following:

I hope that President Duterte’s vision to correct a number of deficiencies in the tax  system to make it simpler, fairer, and more efficient will succeed.