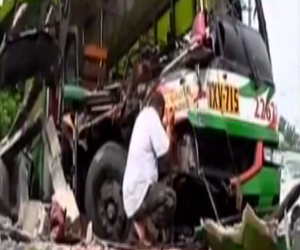 Highway in the boundary of Quezon City and Caloocan. Four

person died as a result and 18 person were injured.

One of the passenger allegedly told the driver to drive slow

because he has a heart problem. The Driver instead of slowing

down, drove even faster which resulted in the bus crashing into

the boundary marker of Quezon City and Caloocan.

has been suspended after the Quirino Highway accident.

Valisno Express Liner has 62 units of bus. Four of its bus have

a franchise covering the route Market-Market-Bohol-Cubao-Iloilo.

SPO3 Ricardo Escorpiso, LTFRB NCR Investigator said that if the

Valisno Express driver is cautious by not driving too fast, he

Chief advised the Inspector of Valisno Express the need to

surrender the person of the fugitive driver.

based in San Jose Bulacan, Philippines was able to talk to the

his son escaped was that he was extremely afraid.

attacked by the people in the area where the accident happened.

The fugitive driver wanted to see first his children before

surrendering his person to the office of Valisno Express.

The Fugitive Driver expressed his willingness to voluntarily

The Valisno Express executive secretary said that within a period

of 24 hours, the fugitive driver will surrender.

The other drivers of Valisno Express Liner expressed their wish

that only the franchise of the bus involved in the accident

should be the only one suspended.

Those rushed to the Dr.Jose Rodriguez Memorial Hospital in

Some passengers were rushed in the East Avenue Medical Center.