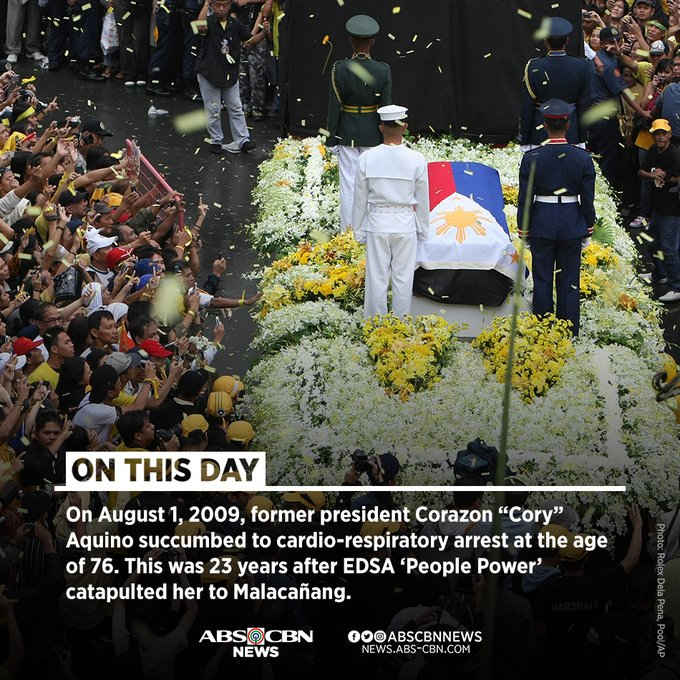 On this day, August 1, is Corazon “Cory” Aquino’s death anniversary. She is the first
woman President of the Philippines.

She is a “Saint of Democracy”-TIME magazine.

Corazon Aquino became the 11th Philippine president after the Filipinos stood united behind her in the snap elections and the 1986 People Power Revolution against former President Ferdinand Marcos.

On August 1, 2009, former president Corazon “Cory” Aquino succumbed to cardio-respiratory arrest at the age of 76. This was 23 years after EDSA “People Power” catapulted her to Malacanang.

On this day, August 1, in 1898, Emilio Aguinaldo, President of the Revolutionary Government of the Philippines, gathered close to 200 presidente mayores or local mayors from the different Philippine provinces at the Cuenca Mansion, also known as Bahay Tisa, in Bacoor, Cavite to take their oath of office and ratify the Act of Independence authored by Apolinario Mabini.

The declaration differs from the one written and read by Ambrosio Rianzares Bautista in Kawit, Cavite on June 12, 1898, as it bears Aguinaldo’s signature and does not state that the Philippines is an American protectorate. The Bacoor Assembly was one of Aguinaldo’s pivotal steps to have his revolutionary government widely recognized. (http://everydayhistory.ph)