Tandang Sora (Melchora Aquino) alone raised her six children and when the Katipunan
was founded, she helped the members by taking care of them like her own children.

This is the reason for her arrest by the Spaniards. The Spaniards tortured
her to extract information on the whereabouts of the KKK’s members but she
never yielded and never gave information. 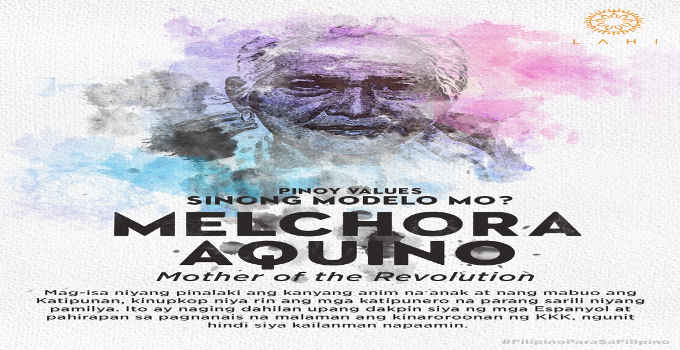 We, who were taught Philippine history by rote, have come to know her through the
stately appellation “Mother of the Katipunan,” but barely appreciated the role
she played in the Revolution.

Heroines always get the short end of the stick, with their exploits often
relegated to the footnotes of history. Male chauvinism seems to permeate our
historical accounts of heroic acts and conventional roles the sexes play with men
as gallants winning wars on the battlefield or gaining political clout, while women
dealt with the daily realities of hearth and home.

True enough, place a woman on the spotlight and gossip on her supposed physical
or sexual aberrations would surely prosper. Unless a multi-layered and objective
understanding of female contributions in Philippine history is seriously undertaken,
we can neither fully appreciate their sacrifices nor change misconstrued perceptions.

Much of what we know about Tandang Sora’s early life is shrouded, not by mystery
but by the ordinariness of her life. Traditional accounts state that she was born
on January 06, 1812 and describe her as a comely peasant woman from Barrio Banlat,
Kalookan, who often essayed the role of Reyna Elena during the annual Santacruzan.

She married Fulgencio Ramos, a cabeza de barangay, and bore him six children.
However, she was widowed young and despite hardship, steeled herself to become a
loving single parent to her children and a shrewd manager of the farm and businesses
inherited from her spouse.

Although Tandang Sora could have embraced a comfortable life, her character was
nurtured and strengthened by the seasonal rhythms of the farmer’s life: tilling the
land, sowing and reaping its crops. It bolstered her empathy towards her indigent
neighbors, who assisted her during the harvest, and this sense of community,
encouraged her to wholeheartedly share her abundance.

How did Andres Bonifacio come to know Tandang Sora? How was she able to embrace his
principles, if he did not frequent her home as a guest? It is probable that her sons
were members of the Katipunan, and that Bonifacio might have engaged in heated
discussions under her roof, which convinced her of the legitimacy of the
Revolution’s aspirations for freedom and nationhood.

Although well past her eighties when the 1896 Revolution flared, Tandang Sora,
risked both life and livelihood to clandestinely support the needs of the Katipunan.
Through her generous spirit, Tandang Sora provided food, shelter, medicines and
motherly comfort for weary and injured Katipuneros. As a recognized community leader,
she mobilized her countrymen for the Revolution, and her selfless efforts heartened
Filipinos to continue on the struggle.

In Katipunero Santiago V. Alvarez’s narrative of the Philippine Revolution, it was
in Tandang Sora’s own home where the famed “cry” and tearing of the cedulas took place:

“At ten o’clock that Sunday morning, 23 August 1896, we arrived at Sampalukan, Bahay Toro. Our number had grown to more than 500 and the house, yard, and granary of Cabesang Melchora was getting crowded with us Katipuneros. The generosity of Cabesang Melchora was no less than that of Apolonio Samson. Like him, she opened her granary and had plenty of rice pounded and animals slaughtered to feed us…

The following day, Monday, August 24, more Katipuneros came and increased the number to more than a thousand, the Supremo called a meeting at 10 o’clock that morning inside Cabesang Melchora’s barn…After the adjournment of the meeting at twelve noon, there were tumultuous shouts of ‘Long Live the Sons of the People!’ ”

Her very tenderness towards these Katipuneros, who were peasants as well, showed
the mettle and strength of her defiance against the colonial power. What crime should
be imputed to a grandmother who loved her countrymen? Tandang Sora stood her        ground at Pasong Putik, Novaliches and was arrested by the Spanish authorities on      August 29, 1896.  Confined at the notorious Bilibid Prison, she was mercilessly      questioned but steadfastly refused to betray the Supremo and other Katipuneros.

Exiled to Guam for six years, Tandang Sora grieved at this enforced disconnection
from her homeland, yet endured despite the separation from family and countrymen. At
the ripe age of 91, she was released by the Americans, Spain’s colonial successors
in February 1903. She faithfully returned to her home in Barrio Banlat, a tearful
homecoming among family and neighbors.

Although age had crippled Tandang Sora’s body, her patriotic fervor remained undimmed.
Refusing honors and despite the privations of penury, she was satisfied to have loved
her country and people too well. Tandang Sora peacefully passed away on February 19,
1919 at 107 years old. Her former comrades extolled her charity and sacrifice,
laying her to rest at the Cementerio del Norte at the Mausoleo de los Veteranos de
la Revolucion.

What lessons can we learn from Tandang Sora’s life? Simply, that valor is neither
dictated by age nor by gender, but sired by determination for selfless service when
the opportunity arises. Finally, love of country may be best realized through the
day-to-day practice of virtues: kasipagan (industry), kagalingan (excellence),
katapatan (integrity), kalinga at pagmamalasakit sa kapwa (care and sympathy for
others), and pag-ibig sa Diyos (love of God). National Historical Commission of the Philippines