Home  »  Government   »   Barangay Election And SK Election, Are You Qualified To File A Certificate of Candidacy?

The DILG in its twitter account posted the following reminders for candidates and
voters and the public in general regarding the fast approaching Barangay Election and SK Election.

For those who are willing to run for office in the coming barangay election and SK
election, the filing of the certificate of candidacy will start on April 14 and end on
April 20.

The Election period starts on the first day of the filing of candidacy of the candidates  and end one week after the date of the election.

The Election period is from April 14 to May 21.

The Election day is on May 14.

June 13 will be the last day of filing statements of contributions and expenditures
(SOCE). 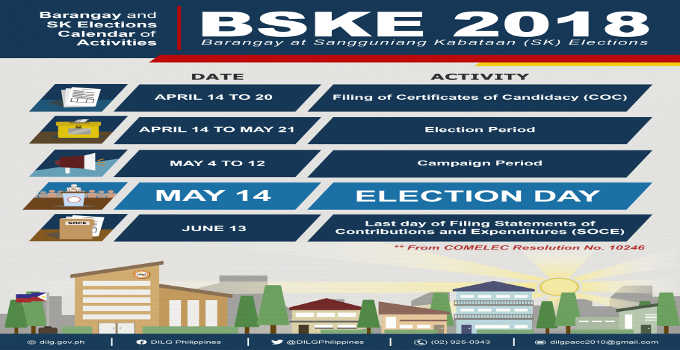 Before filing your certificate of candidacy, be aware that according to the information disseminated by DILG in its twitter post, a person running for the position of Barangay Chairperson or any member of the SK or sangguniang kabataan shall not be  eligible to run for office if he/she has a relative by consanguinity or affinity in the first and second degree who is an incumbent elected national, regional, provincial, municipal or barangay official in the locality where they intend to be elected.

Your relatives by consanguinity in the first degree are your mother, father, son and
daughter.

Your relatives by affinity in the first degree are your mother in law and father in law.

Your relatives by consanguinity in the second degree are your brother, sister, grandfather, grandmother, grandson and granddaughter.

Your relatives by affinity in the second degree are your grandfather-in-law,
grandmother-in-law, brother-in-law and sister-in-law.

You are not disqualified to run in the barangay and SK election, so what are the
qualification to run for the office of Punong Barangay or Barangay Chairperson and  members of the sanggunian barangay (kagawad).

The Following are the qualifications:

Candidates for the sangguniang kabataan must be at least fifteen (15) years of age but not more than twenty-one (21) years of age on election day. (R.A.7160)

The Barangay election and SK Election should have been held last October 2017.

But a law was passed postponing it and scheduled it on the second Monday of May 2018 which is May 14.