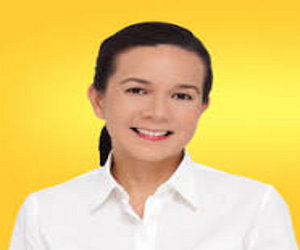 Senator Grace Poe is now officially a declared candidate for

the position of President of the Republic of the Philippines.

How well do you know her?

She was born on September 3, 1968 in front of the Jaro Church

She is the adoptive daughter of Philippine movie stars Fernando

She is a foundling. Record shows that she was born in Iloilo,

one of the island province in the Visayas. She was abandoned

by her biological mother at birth.

Sen Grace Poe is married to Teodoro Llamanzares in 1991. They

were blessed with 3 lovely children, Brian, Hannah and Nikka.

Sen Grace Poe studied Development Studies at the University of

the Philippines in Manila for 2 years. She later transferred

to the United States to continue her studies.

She has a degree in Political Science at Boston College in

Mary Grace Poe worked as the Chairman of the Movie and

Television Review and Classification Board (MTRCB) from 2010

She run for Senator in the 2013 national election and won,

becoming the No.1 Senator.

to run for President of the Republic of the Philippines.

She will run for President with Senator Francis Escudero as her

Both will run as Independent. In the history of Philippine

politics, can you remember a Presidential candidate who

won the election as independent?

News report are circulating that talks are ongoing regarding

a possible coalition with the Nationalist Peoples Coalition,