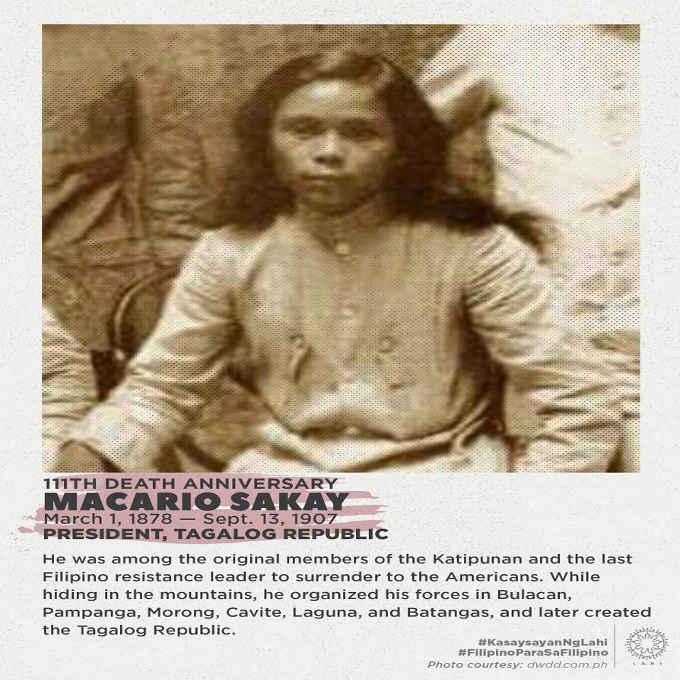 The President of Tagalog Republic (Macario Sakay) was born in Tondo, Manila, on March 1, 1878. His first job was that of an apprentice in a calesa shop. Later he became a tailor and stage actor before joining the Katipunan Movement led by Andres Bonifacio.

Macario Sakay was among the original members of the Katipunan and the last Filipino resistance leader to surrender to the Americans. He joined the Katipunan 1894.

In the early years of the 20th century, as Emilio Aguinaldo surrendered to the Americans, Macario Sakay, commander of the remnants of the Filipino revolutionary army, was branded a bandolero (bandit) by the US forces who had inflicted themselves upon the Philippines. (inquirer)

On July 4, 1902, US President Theodore Roosevelt issued a proclamation officially ending what Americans referred to as the “Philippine Insurrection.” In the proclamation, he announced that “peace had been established in all parts of the archipelago except in the country inhabited by the Moro tribes.

The so-called “insurrection” was expensive and bloody for both sides. Americans spent some $600 million or roughly $10 billion in today’s currency and lost 4,234 men who were killed in action. Filipino losses came up to some 20,000 soldiers and 200,000 civilian casualties.

The surrender of Gen. Miguel Malvar in April 1902, provided the United States with a basis for declaring that the war was over. All other anti-American activities after Malvar’s surrender were considered the work of bandits or tulisanes.”

The reality of the situation was that the Philippine-American War continued for almost a decade after the Roosevelt proclamation.

One of the revolutionary heroes who continued the fight was Macario de Leon Sakay.

From 1902 to 1906, from his stronghold in the mountains of Laguna province, he led an effective guerrilla campaign against the Americans. The main area of operations of Sakay’s resistance movement was in the southern Tagalog provinces of Rizal, Batangas, Laguna and Cavite. So successful were his exploits that the Americans resorted to “hamleting” (concentrating of villagers in one location for more effective control) in areas where Sakay had strong mass support.

In 1905, Governor-General Henry Ide sent an ilustrado, Dominador Gomez, to speak to Sakay with an offer of amnesty for him and his men. Part of the offer was the establishment of a Philippine Assembly as a starting point toward eventual independence. The idea appealed to Sakay who dreamed of Filipinos freely participating in determining their course as a nation.

As a result, he surrendered in July 1906. It was a trap. He was welcomed in Manila, but while attending a party tendered by the Constabulary chief Col. Henry H. Bandholtz, Sakay and his chief subordinates were disarmed and arrested. Accused of being a bandit under the Brigandage Act of 1902, he was sentenced to death and hanged on Sept. 13, 1907. (The Brigandage Act held that persons refusing to give allegiance to the American government in the Philippines were liable for arrest and execution.)

Camp General Macario Sakay in Los Baños, Laguna was named after the general in January 2016, when Armed Forces of the Philippines Chief of Staff Gen. Hernando Iriberri issued General Order No.30, changing the camp’s name from Camp Eldridge, a name the camp had been given during the American occupation a century prior.