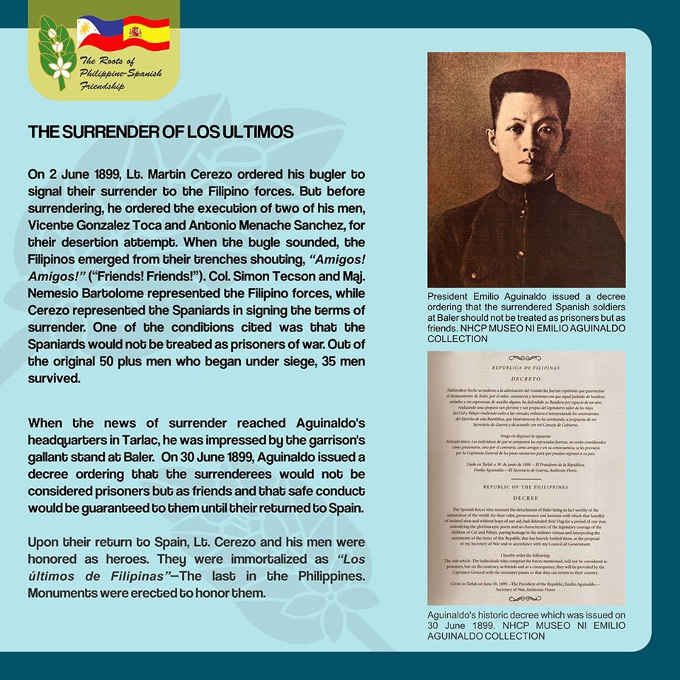 The Surrender of Los Ultimos | @NHCPOfficial

The Surrender of Los Ultimos

On 2 June 1899, Lt. Martin Cerezo ordered his bugler to signal their surrender to the Filipino forces. But before surrendering, he ordered the execution of two of his men, Vicente Gonzales Toca and Antonio Menache Sanchez, for their desertion attempt. When the bugle sounded, the Filipinos emerged from their trenches shouting, “Amigos! Amigos!” (“Friends! Friends!). Col. Simon Tecson and Major Nemesio Bartolome represented the Filipino forces, while Cerezo represented the Spaniards in signing the terms of surrender. One of the conditions cited was that the Spaniards would not be treated as prisoners of war. out of the original 50 plus men who began under siege, 35 men survived.

When the news of the surrender reached Aguinaldo’s headquarters in Tarlac, he was impressed by the garrison’s gallant stand at Baler. On 30 June 1899, Aguinaldo issued a decree ordering that the surrenderees would not be considered prisoners but as friends and that safe-conduct would be guaranteed to them until they returned to Spain.

Upon their return to Spain, Lt. Cerezo and his men were honored as heroes. They were immortalized as “Los Ultimos de Filipinas”- The last in the Philippines. Monuments were erected to honor them.