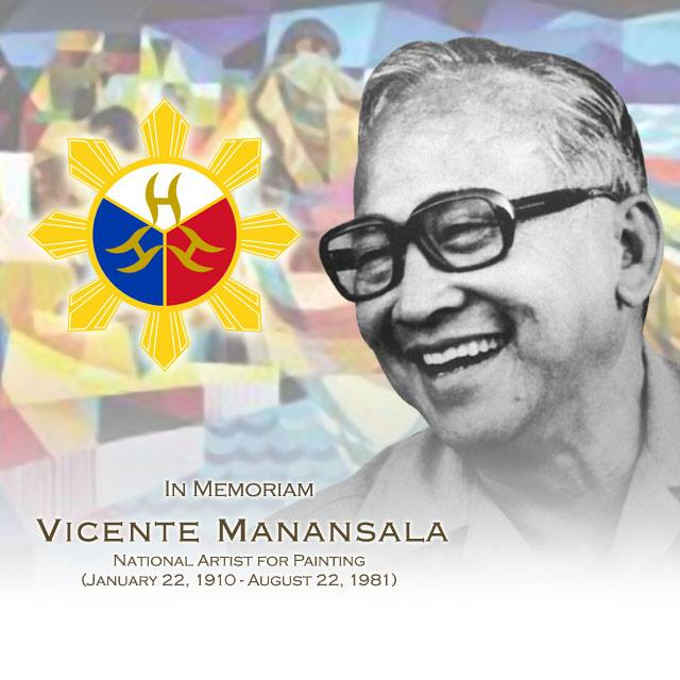 On this day, August 22, 2019, is the 38th death anniversary of Vicente Manansala, National Artist for Painting.

Vicente Manansala‘s paintings are described as visions of reality teetering on the edge of abstraction. As a young boy, his talent was revealed through the copies he made of the Sagrada Familia and his mother’s portrait that he copied from a photograph.

After finishing the fine arts course from the University of the Philippines, he ran away from home and later found himself at the Philippines Herald as an illustrator. It was there that Manansala developed a close association with Hernando R. Ocampo, Cesar Legaspi, and Carlos Botong Francisco, the latter being the first he admired most.

For Manansala, Botong was a master of the human figure. Among the masters, Manansala professes a preference for Cezanne and Picasso whom he says have achieved a balance of skill and artistry.

He trained in Paris and at Otis School of Drawing in Los Angeles. Manansala believes that the beauty of art is in the process, in the moment of doing a particular painting, closely associating it with the act of making love. “The climax is just when it’s really finished.”

On this day, August 22, in 2011, the court hearing on the right of abode case Vallejos and Domingo v. Commissioner of Registration began at the Hong Kong’s Court of First Instance.

The case was filed by Filipino domestic workers Evangeline Vallejos and Daniel Domingo who were seeking permanent residence and right of abode in Hongkong.

The court initially ruled in favor of Vallejos and Domingo on September 30, 2011, but the Court of Appeal overturned the ruling on March 28, 2012.

Vallejos and Domingo jointly appealed the ruling in the Court of Final Appeal, but the appeal was rejected on March 25, 2013. The case polarized Hong Kong between those who supported the two Filipinos and those who opposed their right of abode. (everydayhistory.ph)