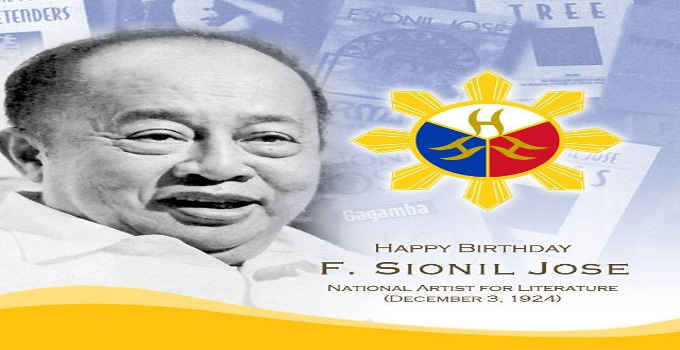 F. Sionil Jose’s writings since the late 60s, when taken collectively can best be
described as epic. Its sheer volume puts him on the forefront of Philippine writing in
English.

But ultimately, it is the consistent espousal of the aspirations of the Filipino for
national sovereignty and social justice that guarantees the value of his oeuvre.

In the five-novel masterpiece, the Rosales saga, consisting of The Pretenders, Tree,
My Brother, My Executioner, Mass, and Po-on, he captures the sweep of Philippine
history while simultaneously narrating the lives of generations of the Samsons whose
personal lives intertwine with the social struggles of the nation.

Because of their international appeal, his works, including his many short stories, have
been published and translated into various languages. (fb)

F. Sionil Jose is also a publisher, lecturer on cultural issues, and the founder of the
Philippine chapter of the international organization PEN.

He was bestowed the CCP Centennial Honors for the Arts in 1999; the Outstanding
Fulbrighters Award for Literature in 1988; and the Ramon Magsaysay Award for  Journalism, Literature, and Creative Communication Arts in 1980. (ncca)