The National Historical Commission of the Philippines is marking the 111th birth anniversary of President Ramon Magsaysay this Friday, 31 August 2018, at his childhood home, now the Museo ni Ramon Magsaysay in Castillejos, Zambales. 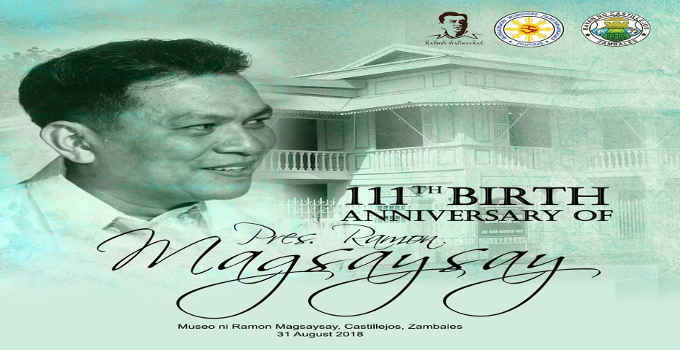 Among the highlights of the event is the unveiling of a new full-body statue of the former president and the inauguration of a 360-virtual reality feature.

He is best known for successfully defeating the communist-led Hukbalahap (Huk) movement.

The son of an artisan, Magsaysay was a schoolteacher in the provincial town of Iba on the island of Luzon.

Though most Philippine political leaders were of Spanish descent, Magsaysay was of Malay stock, like most of the common people. Working his way through José Rizal College near Manila, he obtained a commercial degree in 1933 and became the general manager of a Manila transportation company.

After serving as a guerrilla leader on Luzon during World War II, he was appointed the military governor of his home province, Zambales, when the United States recaptured the Philippines.

He served two terms (1946–50) as a Liberal Party congressman for Zambales, his first experience in politics.

President Elpidio Quirino appointed Ramon Magsaysay as secretary of defense to deal with the threat of the Huks, whose leader, Luis Taruc, in February 1950 established a People’s Liberation Army and called for the overthrow of the government.

Magsaysay then carried out until 1953 one of the most successful antiguerrilla campaigns in modern history. Realizing that the Huks could not survive without popular support, he strove to win the trust of the peasants by offering land and tools to those who came over to the government side and by insisting that army units treat the people with respect.

Reforming the army, he dismissed corrupt and incompetent officers and emphasized mobility and flexibility in combat operations against the guerrillas.

By 1953 the Huks were no longer a serious threat, but Magsaysay’s radical measures had made many enemies for him within the government, compelling him to resign on February 28, when he charged the Quirino administration with corruption and incompetence.

Although Magsaysay was a Liberal, the Nacionalista Party successfully backed him for the presidency against Elpidio Quirino in the 1953 elections, winning the support of Carlos P. Romulo, who had organized a third party.

Magsaysay promised reform in every segment of Philippine life, but he was frustrated in his efforts by a conservative congress that represented the interests of the wealthy.

Despite initial support of Congress in July 1955, Magsaysay was unable to pass effective land-reform legislation; government indifference to the plight of the peasants then undid most of his good work in gaining the support of the people against the Huks. Nevertheless, he remained extremely popular and had a well-deserved reputation for incorruptibility.

In foreign policy, Magsaysay remained a close friend and supporter of the United States and a vocal spokesman against communism during the Cold War.

He made the Philippines a member of the Southeast Asia Treaty Organization, which was established in Manila on Sept. 8, 1954.

Before the expiration of his term as president, Magsaysay was killed in an airplane
crash, he was succeeded by the vice president, Carlos P. Garcia. (Britannica)