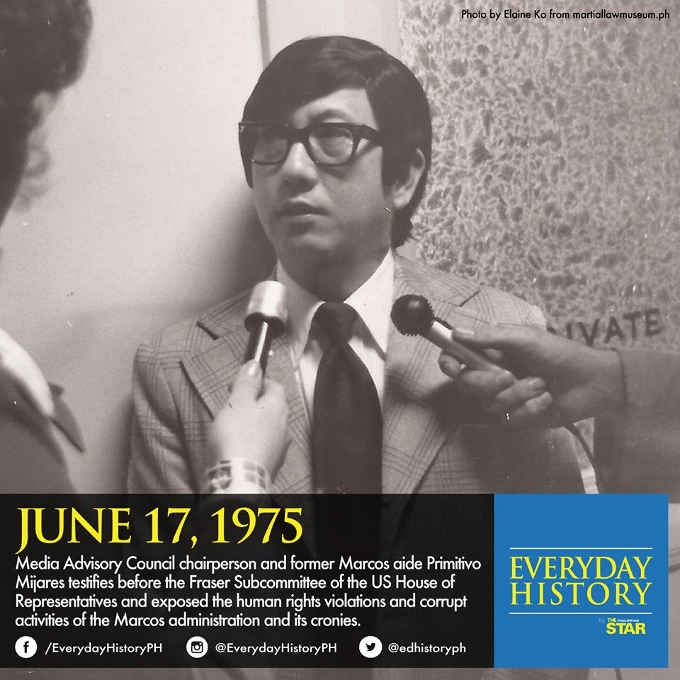 On this day, June 17, in 1975 Media Advisory Council chairperson and former Marcos aide Primitivo Mijares testifies before the United States House Subcommittee on International Organizations and Movements headed by Rep. Donald Fraser (D-Minnesota) and exposed the human rights violations and corrupt activities of the  Marcos administration and its cronies.

The founding anniversary is actually June 16 but the office of the Mayor requested that Monday, 17 June 2019, be declared a special non-working day in lieu of 16 June 2019 which falls on a Sunday.

On this day, June 17, we celebrate 39 years of the establishment of formal diplomatic relations between the Philippines and the United Arab Emirates.

With around 618,726 Filipinos as of May 2018, the Philippines has an Embassy in Abu Dhabi and a Consulate General in Dubai.

The Philippines established diplomatic relations with the United Arab Emirates in 1980.

On this day, June 17, is the 29th death anniversary of National Artist Lazaro Francisco. He passed away in 1980. He is a national artist for literature.

He gained prominence as a writer not only for his social conscience but also for his “masterful handling of the Tagalog language” and “supple prose style”. With his literary output in Tagalog, he contributed to the enrichment of the Filipino language and literature for which he is a staunch advocate. He put up an arm to his advocacy of Tagalog as a national language by establishing the Kapatiran ng mga Alagad ng Wikang Pilipino (KAWIKA) in 1958.