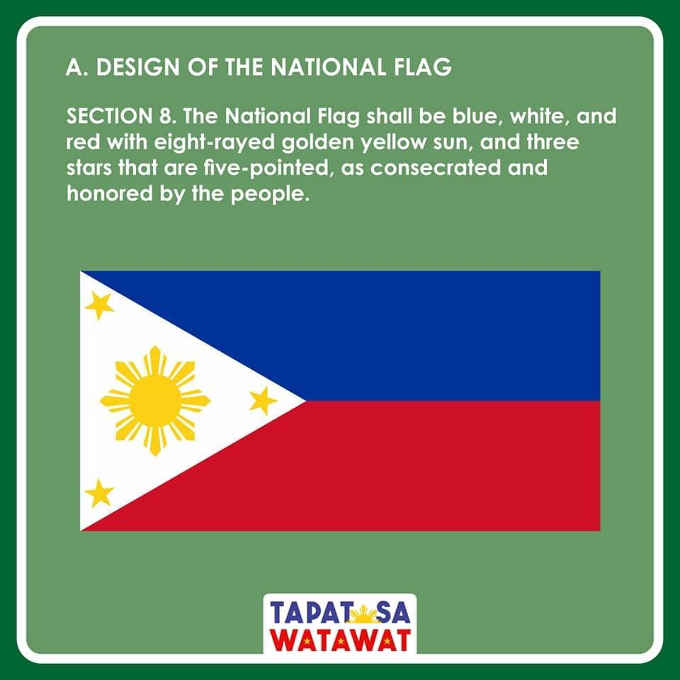 National symbols like flags and heraldic items embody the identity of a nation. The country’s history, culture, and political aspirations command the respect of its citizen and those of other nations.

The following are excerpts from the rules and regulations implementing the Flag and Heraldic Code of the Philippines (Republic Act No. 8491).

Design of the National Flag

Section 8. The National Flag shall be blue, white, and red with eight-rayed golden yellow sun, and three stars that are five-pointed, as consecrated and honored by the people.

Hoisting and Display of the National Flag

Section 9. The National Flag shall be displayed in all buildings, official residences, public plazas, and institutions of learning every day throughout the year.

Section 11. The National Flag shall also be displayed in private buildings and residences or raised in the open flagstaff in front of said buildings every April 9 (Araw ng Kagitingan); May 1 (Labor Day); National Flag Days from May 28 to June 12 (Independence Day); last Sunday of August (National Heroes Day); November 30 (Bonifacio Day); and December 30 (Rizal Day); and on such other days as may be declared or approved by the President and/or local chief executives.

The National Flag may also be raised and displayed at sunrise and lowered at sunset and throughout the year in the open flagstaff in front of private buildings: provided, that proper flag ceremonies be observed in accordance with these rules.

Section 12. All government entities should observe flag days with appropriate ceremonies. Socio-civic groups, non-government organizations, and the private sector are enjoined to observe and cooperate in making the celebration a success.

Source: National Flag Day of the Philippines @PIA_RIII via RA No.8491