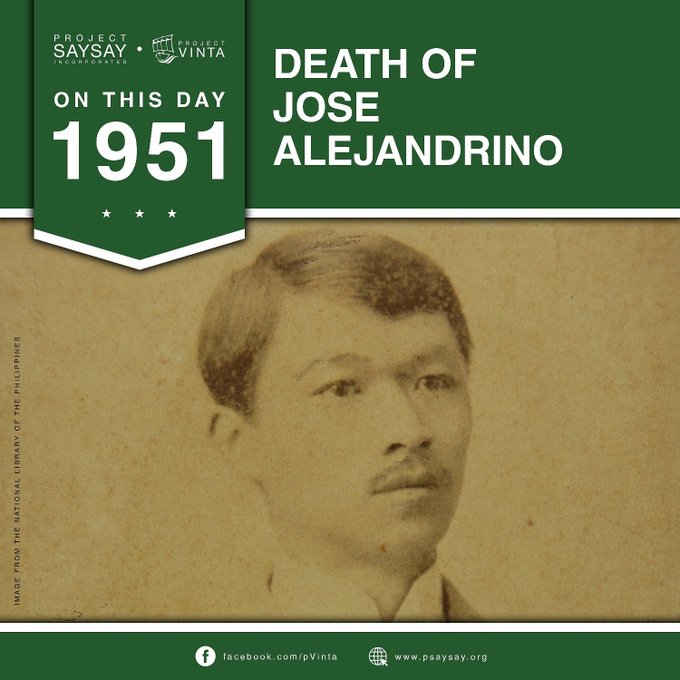 Descended from a landed family in Arayat, Pampanga, Alejandrino was influenced by his patriotic father to be civic-minded. His father was banished to the Cordilleras during the witch-hunting drive of the Spanish authorities due to being critical of the friars in their province.

He was then finishing his chemical engineering degree at Ghent. Upon returning to Manila, he was convinced by his Caviteño classmate in Ghent, Edilberto Evangelista, to join the Katipunan.

He was first adamant to the cause of the Katipunan, which was not surprising because his fellow reformists Rizal and Antonio Luna saw the revolution imprudent.

His association with Evangelista was the reason why Alejandrino became active in Cavite, not in Pampanga. (His home province was still loyal to Spain and the revolution was unpopular until 1898.)

Alejandrino was not new to patriotic advocacy. Upon arriving in Madrid in 1889, he joined La Solidaridad and became a pioneer staff. He also assisted Rizal in preparing the proofs of El Filibusterismo, making him the first to read the novel.

In 1895, he returned to Manila and became Katipunero. Like Rizal and Antonio Luna, he was reluctant to join the revolution, until he was inspired by his classmate in Ghent, the Caviteño Edilberto Evangelista. He submitted himself to Aguinaldo in Kawit in November 1896.

Evangelista recommended to Bonifacio and Aguinaldo to entrust in Alejandrino the mission to smuggle saltpeter, dynamite with detonators, and rifle pistons from Japan and Hong Kong, which the two leaders approved.

Alejandrino failed in his mission because of the restriction by the British government in Hong Kong.

Alejandrino returned to Manila with the U.S. Asiatic Squadron in April 1898. He witnessed how the Americans sank the obsolete Spanish ships in the Battle of Manila Bay.

In July 1898, he joined Luna, who just returned from exile after implicated by the Spaniards in the revolution, in planning the defenses and trenches of the Filipino forces.

He also became a congressman in the Malolos Congress and among those who conceived the 1899 Philippine Constitution. He concurrently headed the nascent DPWH and Department of Agriculture in the Aguinaldo administration.

During the Philippine-American War, he became the commanding general of Central Luzon and concurrently military governor of Pampanga. Months after Aguinaldo surrendered, Alejandrino capitulated to Frederick Funston in Arayat.

Months after his surrender, he became a city engineer of Manila but resigned less than a year later. In 1925, he was appointed senator for Sulu and Mindanao, and in 1934 elected as representative of Pampanga in the 1934 Constitutional Convention.

Today in History on June 1, 1882, Marcelo H. Del Pilar establishes Diariong Tagalog. It was the 1st bilingual newspaper in the Philippines, published in Tagalog and Spanish. It advocated for equal rights for Filipinos and exposed the corruption of colonial gov, held sway by the friars.

On this day we commemorate the 112th birth anniversary of the late Foreign Affairs Secretary Felino F. Neri, Sr., who earned the title of “Benjamin in the Cabinet” when he was promoted by President Quirino during a regular cabinet meeting.

Late SFA Neri’s promotion to full cabinet rank was viewed in diplomatic circles as a tribute to career men in the foreign service.