Today is Philippine and British Friendship Day, by virtue of Proclamation No. 1592,
s. 2008, to celebrate, enhance and enrich the historical, political, economic, and
cultural ties that strongly bind the Philippines and the United Kingdom. 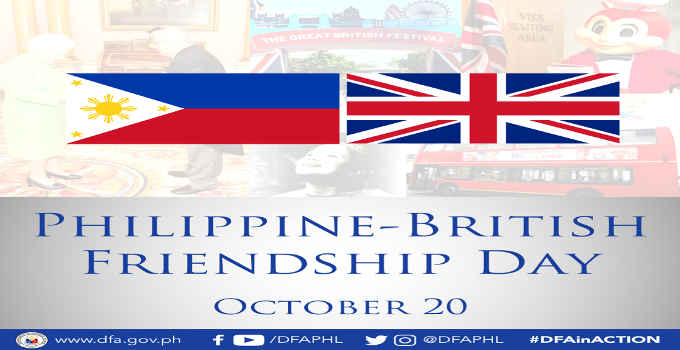 October 20 marks the inauguration in 2008 of the British Embassy in Taguig. But the
Filipinos’ first contact with the British dates back to October 1579, with the arrival
in Mindanao of Sir Francis Drake.

Today also marks the opening of the first Jollibee store in London.

MALACAÑAN PALACE
MANILA
BY THE PRESIDENT OF THE PHILIPPINES

WHEREAS, Proclamation No. 381 declared December 7, 2000, and every year thereafter as Philippine-British Friendship Day to celebrate, enhance, and enrich the historical, political, economic, and cultural ties that strongly bind the Republic of the Philippine (RP) and United Kingdom (UK);

WHEREAS, UK Ambassador to Philippines, Peter Beckingham, requested the change of date of celebration of Philippine-British Friendship Day from December 7 to October 20 to coincide with the inauguration of the new British Embassy to be officiated by the UK Ministry of Trade and Investment, which therefore marks an important milestone in the history of the relations between RP and UK.

NOW, THEREFORE, I, GLORIA MACAPAGAL-ARROYO, President of the Republic of the Philippines, by virtue of the powers vested in me by law, do hereby declare October 20, 2008, and every year thereafter as Philippine-British Friendship Day.

IN WITNESS WHEREOF, I have hereunto let my hand and caused the seal of the Republic of the Philippines to be affixed.

DONE in the City of Manila, this 20th day of August, in the year of our Lord,
Two Thousand And Eight.