Do you know what the small dot in the UN Emblem means? 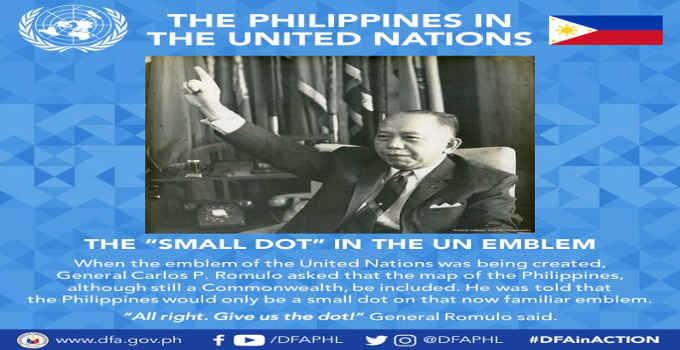 The Small Dot In The UN Emblem | Image Credit | DFA

October 2018 marks the 73rd anniversary of the United Nations (UN).

The Department of Foreign Affairs (DFA) marks the 73rd founding anniversary of the UN this October with a month-long social media series, highlighting the contributions of the Philippines to the UN over the years.

If one examines the UN seal, there is a small dot where the Philippines is located which was made possible by Carlos P. Romulo, future UN General Assembly President and Philippines Foreign Affairs Secretary.

When the emblem of the United Nations was being created, General Carlos P. Romulo asked that the map of the Philippines, although still a commonwealth, be included.

He was told that the Philippines would only be a small dot on that familiar emblem.

“All right, Give us the dot”, General Romulo said. DFA