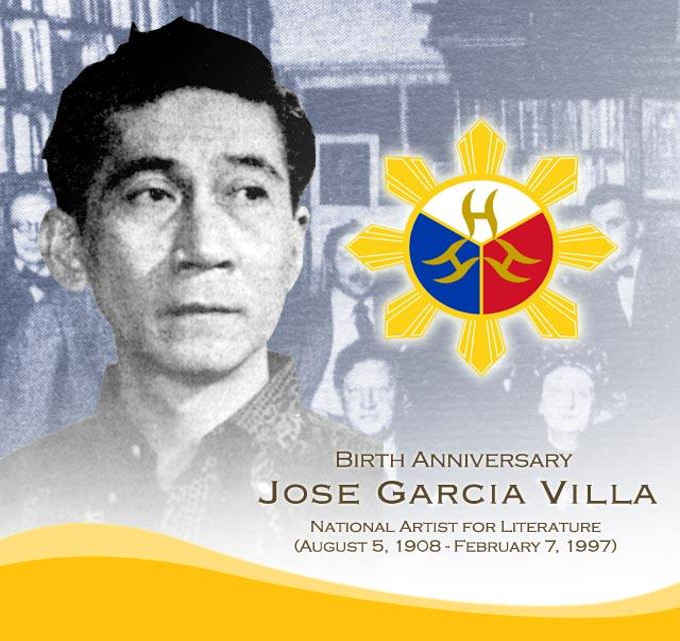 On this day, August 5, 2019, is the 111th birth anniversary of Jose Garcia Villa, National Artist for Literature.

Jose Garcia Villa is considered as one of the finest contemporary poets regardless of race or language. Villa, who lived in Singalong, Manila, introduced the reversed consonance rime scheme, including the comma poems that made full use of the punctuation mark in an innovative, poetic way.

The first of his poems “Have Come, Am Here” received critical recognition when it appeared in New York in 1942 that, soon enough, honors and fellowships were heaped on him: Guggenheim, Bollingen, the American Academy of Arts and Letters Awards. He used Doveglion (Dove, Eagle, Lion) as a pen name, the very characters he attributed to himself, and the same ones explored by e.e. cummings in the poem he wrote for Villa (Doveglion, Adventures in Value). Villa is also known for the tartness of his tongue.

Villa’s works have been collected into the following books: Footnote to Youth, Many Voices, Poems by Doveglion, Poems 55, Poems in Praise of Love: The Best Love Poems of Jose Garcia Villa as Chosen By Himself, Selected Stories, The Portable Villa, The Essential Villa, Mir-i-nisa, Storymasters 3: Selected Stories from Footnote to Youth, 55 Poems: Selected and Translated into Tagalog by Hilario S. Francia. (https://ncca.gov.ph/)

On this day, August 5, in 1963, President Diosdado Macapagal, together with Indonesian President Soekarno and Malayan Premier Tunku Abdul Rahman, signed the Manila Declaration which contains the agreement among the three heads of state to take initial steps towards the establishment of the Greater Malayan Confederation or MAPHILINDO which comprises of Malaya, the Philippines, and Indonesia.

MAPHILINDO was conceived by then-President Macapagal as a vehicle to achieve unity among the Malay peoples by holding frequent and regular consultations at all levels to be known as MUSHAWARAH MAPHILINDO. However, MAPHILINDO did not succeed in realizing its goals.