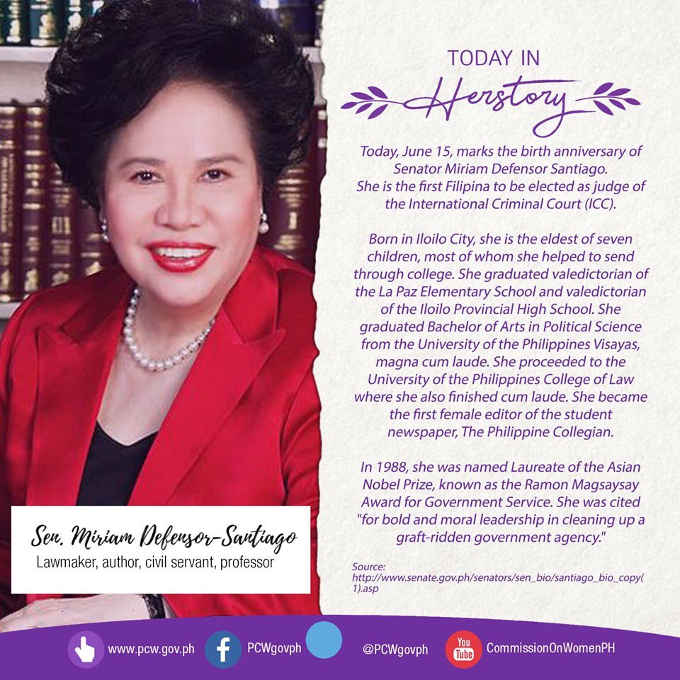 On this day, June 15, marks the birth anniversary of Senator Miriam Defensor Santiago. She is the first Filipina to be elected as judge of the International Criminal Court.

Miriam Defensor Santiago was born in Iloilo City in 1945. She is the eldest of 7 children, most of whom she helped to send through college.

She holds an amazing record of having served in all three branches of government.

She became the first female editor of the student newspaper, The Philippine Collegian.

She pursued further studies in universities abroad including Oxford, Harvard, and Cambridge.

In 1988, she was named Laureate of the Asian Nobel Prize, known as the Ramon Magsaysay Award for Government Service. She was cited “for bold and moral leadership in cleaning up a graft-ridden government agency.” @PCWgovph | senate.gov.ph

On this day, June 15, in 1991, Mount Pinatubo had a violent Plinian eruption, with the eruption column reaching 19 km. This was the first in the series of large eruptions of this volcano that culminated on June 15.

The Philippines, a G77 founding member, served as the presiding country of the G77 in 1995.

The G77 aims to promote the collective economic interests and enhance the joint negotiating capacity of 77 of the UN’s developing member countries.

Today in History in 1896, physician Pio Valenzuela, Katipunan fiscal, leaves in the morning on board steamship Venus bound for Dapitan, to consult with the exiled Jose Rizal on an armed revolution vs. Spain. Valenzuela was with Raymundo Mata, a blind patient whom he used as cover.

Valenzuela arrived in Dapitan on 21 June. With the steamship came Josephine Bracken, Narcisa Rizal, and Angelica Lopez—all came to Dapitan for Rizal. When Valenzuela met Rizal, the physician asked for a private audience. Valenzuela revealed the Katipunan to him.

Jose Rizal counseled Pio Valenzuela the ff:
(1) Arms & ammunitions & support of the wealthy must be secured first to mount the revolution.
(2) If Katipunan is discovered, better fight than to escape.
(3) If the wealthy do not support the revolution, better keep them neutral.

Upon Valenzuela’s return, Valenzuela reported Rizal’s advice. Andres Bonifacio and many of the Katipunan members agreed with Rizal. However, upon Pio Valenzuela’s capture, Valenzuela, under duress, told the Spanish authorities that Rizal opposed the revolution to protect him.

Moreover, Paciano Rizal was a Katipunan general and 2 of Rizal’s sisters attended the private wedding ceremony of Andres Bonifacio and Gregoria de Jesus, further proving that there was no disagreement bet Rizal and Bonifacio on the Philippine revolution’s legitimacy.