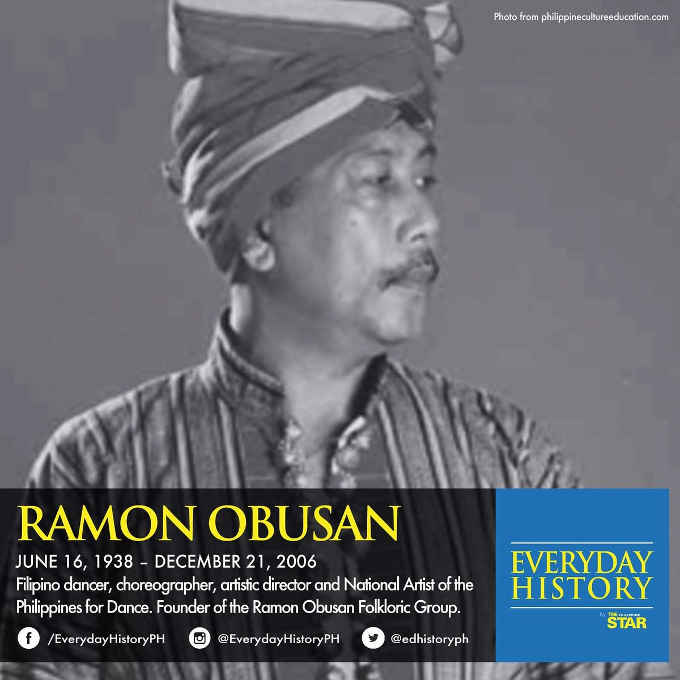 On this day, June 16, in 1938, Filipino dancer, choreographer, and artistic director Ramon Obusan was born in Legazpi City, Albay. He is best known for his comprehensive and in-depth research and documentation on the dances and music of different Filipino ethnic groups.

In 1971, he established the Ramon Obusan Folkloric Group (ROFG), a performing arts company that promoted Filipino dances and culture in academic and diplomatic exchanges abroad. He was named National Artist for Dance in May 2006 and died in December that year.

Under the Joint Memorandum Circular, referring agencies such as the DFA’s Office of Migrant Workers Affairs will identify the services for Filipinos that need medical repatriation from a foreign country. These services include airport assistance, endorsement to DOH hospitals or non-DOH facilities, financial assistance through the DSWD or DOH Medical Assistance Program, and PhilHealth membership coverage.

Today (June 16, 2020) in History in 1920, 100 yrs ago, Eva Estrada Kalaw, Filipina senator, assemblywoman, and democracy advocate, is born in Murcia (now Concepcion), Tarlac, Philippines. She was the 1st Filipina senator to win reelection (1971). Kalaw was known for her independent voice. @indiohistorian

Kalaw was acknowledged as one of the few women to have enrolled in UP during the Commonwealth period, going against the grain of Filipina students trained in the Catholic secondary schools that saw UP as too secular for an educational institution.

In 1944, she married Teodoro Kalaw Jr., son of Teodoro & Pura V. Kalaw, known advocates of education and women’s rights. She decided to run for politics, supported by her husband. Kalaw clinched a surprising win in the Senate in 1965, under the Nacionalista Party ticket.

Kalaw won her Senate seat, as did her other party mates, including Ferdinand Marcos who was President. While the two were of the same political party, it would soon be made clear that her independent voice would drive a wedge between her and Marcos.

In 1966, Marcos, in support of the U.S. intervention in the controversial Vietnam War, urged both chambers of Congress (& Kalaw personally) to grant budget to PHILCAG, but Kalaw instead supported the call to send medical professionals and engineers instead of soldiers.

In her 1st term as Senator, she was able to author consequential laws: (1) elevation of Social Welfare Administration to an Executive dept (now DSWD), (2) requiring student & faculty representatives in the ruling bodies of state universities & colleges to amplify representation. (3) increased & standardized public school teacher salaries, (4) initiated “barrio high schools” in the regions ensuring that education was accessible even to the Filipino youth in the most remote places from the urban centers.

Having been dropped by the Nacionalista for her contrary views, Kalaw was invited as a guest candidate for the Liberal Party. On 21 Aug 1971, she was there in LP’s meeting-de-avance at Plaza Miranda, when 2 grenades exploded, wounding the candidates.

Marcos immediately suspended the Writ of Habeas Corpus nationwide. Kalaw spoke the following day (despite her wounds) in the Senate saying that the suspension of the Writ nationwide was “uncalled for” because the bombing was just in the plaza in Quiapo.

Kalaw warns that incidents like this would be a means to declare Martial Law. From then on, she became more vocal vs. the growing authoritarian ways of the Marcos admin. She was also red-tagged, together w/ other LP candidates, and yet still got reelected in the 1971 elections.

With the declaration of Martial Law in September 1972, the padlocking of Congress in January, and the dubious ratification of the 1973 Constitution (via viva voce at the pt of the gun), Kalaw persistently opposed Marcos, having been imprisoned twice.

Even after EDSA 1986, Kalaw joined the opposition vs. Aquino to hold the administration to account. She attempted to run as Senator in 1987, and as Vice President in 1992 but lost. But her track record as stateswoman remains legendary to this day. We commemorate her legacy.

The history of the nascent Philippine democracy in the 20th century will not be complete without mentioning DLSU’s foundation as it became among the landmarks of the new era of Philippine education.

It became an alternative school of choice as the news about its existence spread by word of mouth across the archipelago during its first two years of existence.

“There is hardly any province in our beloved country that does not send one of its sons to the seat of the said school, drinking from its fountain the laudable instructions of its learned teachers,” lauded by a Catholic Spanish newspaper, La Libertad.

The idea of establishing DLSU began in 1905 when Manila Archbishop Jeremiah Harty invited the Lasallian Brothers to establish a foothold in the Philippines.

It was his response to the lack of Roman Catholic schools in the country as American Protestantism was being brought by the Thomasites–moniker of the American public school teachers sent to the Philippines–in various provinces.

The Archbishop resorted to the Lasallian Brothers because he was a product of a Lasallian school back in the US. Financial difficulties prolonged the request of Harty.

In March 1911, the Lasallian Brothers stepped in the Philippines to establish a mission upon the instruction of the Holy See.

On June 16 of the same year, the pioneer Lasallian Brothers opened the De La Salle College (DLSC) at Paco, Manila with 125 primary and secondary male students.

As a response to its growing student population, DLSU transferred its basic education programs to (DLSZ) in Muntinlupa, Rizal (now part of NCR) and became an all-collegiate institution from 1983 until the start of its senior high school program in 2016.

Its College of Career Development, formed in 1980 as a night school for working students, eventually gained autonomy to become the De La Salle Zobel in 1994.

Though time, more Lasallian schools blossomed across the country, now totaling to seventeen. Together with DLSU, these are called OneLaSalle.

Apart from adopting a trimestral calendar in 1981, the 1980s and 1990s saw DLSU transition to become a research university under the leadership of Bro. Andrew Gonzales, FSC, who later became Education Secretary during the Estrada Administration.