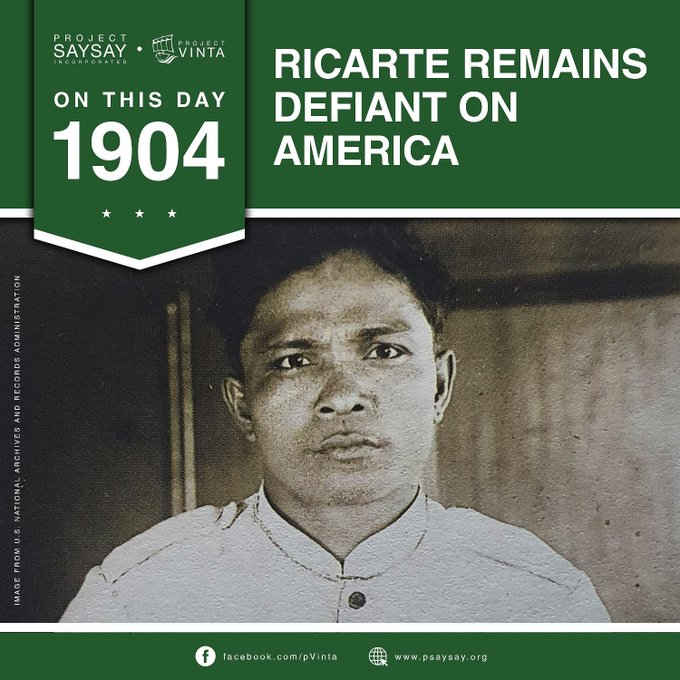 He was convicted of illegal possession of firearms and rebellion after attempting to overthrow the U.S. Insular Government of the Philippines. He was noted for being the only Filipino general who never pledged allegiance to the U.S. until his death.

In 1903, he and Apolinario Mabini were the remaining leaders in exile in Guam (since 1901) who consistently refused to take an oath of allegiance to the U.S. Mabini did, but Ricarte chose deportation to Hong Kong than to go against his will and conscience.

In Hong Kong, he formed the Universal Republic of Philippine Democracy together with Manuel Ruiz. The objective of the organization was to free the Philippines from the U.S.

He clandestinely entered the Philippines in December 1903 and tried winning former comrades in the Philippine Revolution and Republican Army to join his cause. In March 1904, the Americans arrested him in Mariveles, Bataan, and discovered disguising as Jose Garcia.

Upon his release in June 1910, he was again offered amnesty which he consistently refused. This once again caused his deportation to Hong Kong.

He later moved to Japan in 1915 and there supported the imperial ambition of the country in an effort to free the Philippines from the Americans.

Today in History in 1940, anticipating Philippine independence from the U.S., and adhering to the findings of the Institute of National Language, the National Assembly of Philippine Commonwealth passes Act making the “Filipino National Language an Official Language” starting 4 July 1946.

Context: The 1935 Philippine Constitution (Article XIII, section 3), stated that the National Assembly (unicameral Congress) was tasked to “take steps” to “adopt” a “common national language based on one of the existing native languages.” Independence was scheduled on 4 July 1946.

Prior to 1937, the official languages in Philippines were American English and Spanish. The rest in the Philippines spoke different local languages and dialects. In 1936, the Institute of National Language (Surián ng Wikang Pambansâ) was established to choose a native language where Filipino would be based.

Reasons forwarded was that a common language was needed for unity and mutual understanding. But another underlying presupposition was the need for a self-conscious effort to make national identity distinct from American identity — in the context of the nearing independence from the U.S.

On Rizal Day 1937, by virtue of Executive Order No. 134, President Manuel Quezon proclaimed the National Language “based in Tagalog.” It was a unanimous decision of the Institute. It transmitted its findings to Quezon, hence the EO.

Therefore, in 1940, the congressional passage of the National Language, then called “Filipino National Language,” was only a summation of the efforts that began in 1936. However, the state-sponsored national language would not be spoken widely, not until the Japanese occupation.

In 1942, the Japanese Military Administration, in seeking to eliminate all traces of “Western imperialism,” sought to force people to use and promote Filipino for all media, together w/ Nihongo. Placenames were also changed from English to Filipino names.

Shin Seiki (Bagong Araw) was one of the six periodicals during the Japanese Occupation authorized to publish in the Philippines. All periodicals consciously made space for Filipino in their tri-lingual prints.

Today, there is a need for fair representation in the Filipino language and the preservation of the 134 native languages in the Philippines. The conscious incorporation of letters C, F, J, Ñ, Q, V, X, and Z in Filipino orthography, and indigenous words, was to address lack of representation. (Kristoffer Pasion | @indiohistorian)