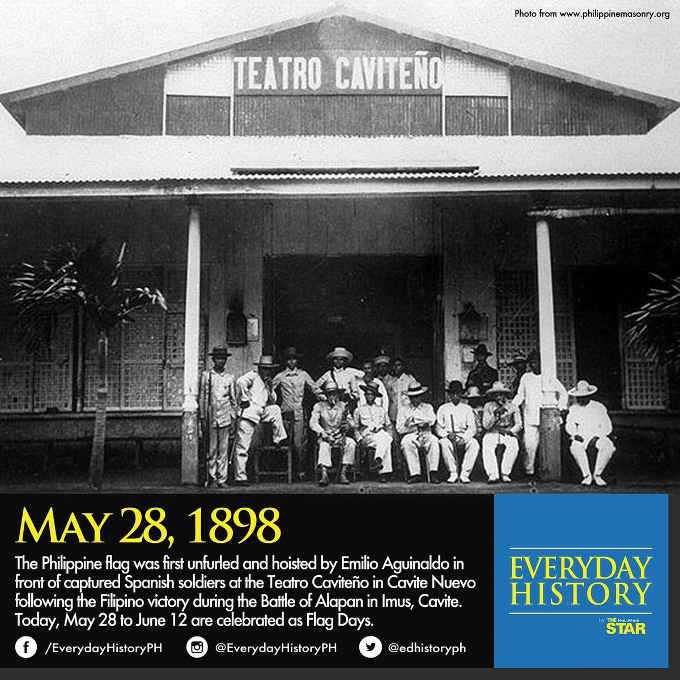 May 28, 1898 “The Philippine flag was first unfurled and hoisted | Image Source: @edhistoryph

On this day, May 28, in 1898, the Battle of Alapan in Imus, Cavite ensued between the Philippine Revolutionary Army and the Spanish troops led by Leopoldo Garcia Peña. Outnumbered and short on ammunition, the Spanish troops surrendered.

They were brought to the Teatro Caviteño at Cavite Nuevo where the prisoners were presented to Emilio Aguinaldo, leader of the revolutionary forces. It was here that Aguinaldo first unfurled and hoisted the Philippine flag.

It was also Aguinaldo’s first victory after being exiled in Hong Kong due to the Pact of Biak-na-Bato. It is celebrated today until June 12 as Flag Days.

The Philippine flag was first unfurled and hoisted by Emilio Aguinaldo in front of captured Spanish soldiers at the Teatro Caviteno in Cavite Nuevo following the Filipino victory during the “Battle of Alapan in Imus, Cavite”.Today, May 28 to June 12 are celebrated as flag days.

Since 1965, the 28th of May of every year is declared National Flag Day throughout the country under Proclamation No. 374 issued by President Diosdado Macapagal.

In 1994, the period between May 28 and June 12 was declared National Flag Days, later enacted into Republic Act No. 8491 in 1998, the year of the centenary of Philippine independence.

The Flag and Heraldic Code declared May 28 to June 12 of each year as Flag Days, during which period all government offices, business establishments, schools, and residences are enjoined to display the flag.