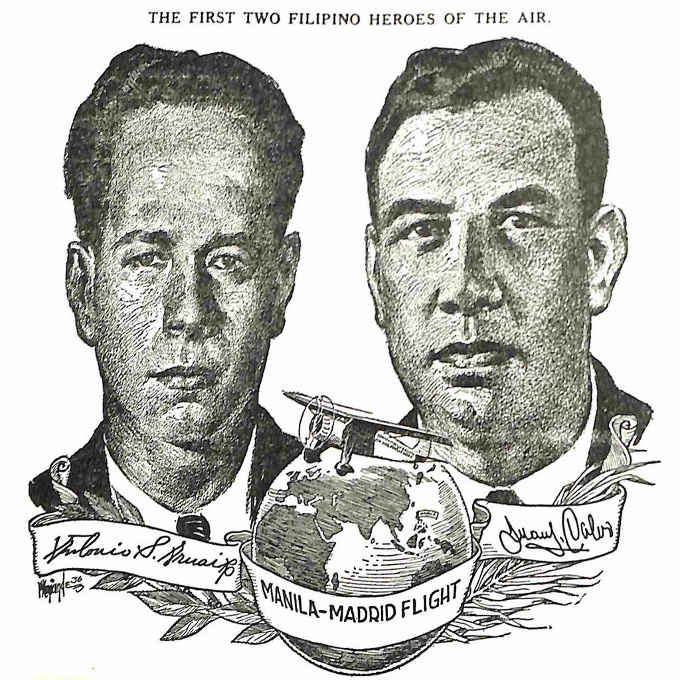 On this day, May 29, in 1936, aviators Juan Calvo and Antonio Arnaiz became the first Filipinos to fly to Madrid, Spain onboard the plane Commonwealth.

The first Filipinos to fly to Madrid, Spain

The first successful aerial journey from Spain to Manila took place in May 1926, when the Legazpi first landed in Manila. This feat was duplicated by Spanish aviator Fernando Rein in 1932, and again, in 1933.

Then, on May 29, 1936, Juan Calvo and Antonio Arnaiz flew the Commonwealth and became the first Filipinos to fly to Madrid, Spain.

It was two years before, in 1934, when Calvo asked help from Fr. Miguel Selga of the Manila Observatory. Calvo wanted to return the gesture of goodwill Spanish aviators had shown by flying to Manila. He also wanted to see his father who was with the Spanish army at the time.

Calvo had received his flying certificate from the Curtiss School of Aviation in Parañaque in 1920. He worked as an automotive salesman from 1934 to 1936, before enrolling at the Valeriano Flying School to qualify for his pilot’s license. He became good friends with the aviator, Antonio Arnaiz. After Calvo broached his idea for the Manila–Madrid flight, they began making preparations.

Calvo and Arnaiz raised money to buy a Fairchild Model 24 aircraft, which Manila Mayor Juan Posadas christened Commonwealth of the Philippines on May 26. Commonwealth President Manuel Quezon declined to support the flight probably to avoid criticism in case the flight failed or the pilots got injured or killed.

Accommodations on the flight were far from comfortable. The extra gas tank occupied most of the aircraft’s free space. This drastically limited the pilots’ baggage to only two shirts and two pairs of pants each, a few sandwiches, and a thermos bottle of coffee. They had no radio, parachutes, nor seatbelts.

Bad weather was the main problem Calvo and Arnaiz encountered during their flight. The two were stranded or delayed several times due to heavy rains and harsh winds. However, they chose to fly through the bad weather on multiple occasions.

The Commonwealth landed in Barcelona on the morning of July 11, 1936, 44 days after it left Manila. A Spanish Air Force escort joined the Commonwealth on the four-and-a-half hour flight from Barcelona to Madrid.

“Near Madrid, six more planes met the Commonwealth. Arnaiz and Calvo approached the airport at 5 p.m. and saw the surrounding area packed with people and vehicles. They circled once overhead and the huge crowd cheered and waved.”

Colonel Juan Calvo, in full army uniform, proudly embraced his son. It would be the last time that the father and son would meet.

Aside from personally bringing tidings from the Philippines, Arnaiz and Calvo, two great Filipino aviators, “transcended being Filipino aviators by helping establish a cross-country navigational route halfway around the world.”(source)

On this day, May 29, in 2012, the Senate found Chief Justice Renato Corona of the Supreme Court guilty of violating Article II, failure to disclose to the public his statement of assets, liabilities, and net worth, of the Articles of Impeachment against him, thus removing him from office.

He was the first Supreme Court Chief Justice to be impeached and was found guilty after a 134-day trial. Supreme Court Associate Justice Maria Lourdes Sereno, who was later ousted on a quo warranto petition, succeeded him. (@edhistoryph)