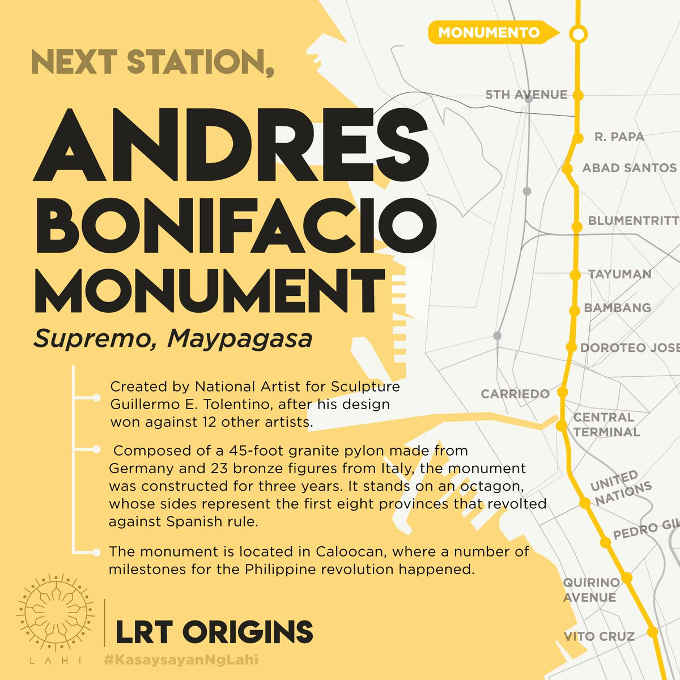 The Monumento LRT station is located in Caloocan City.

Monumento Station is one of the prime stations in the LRT-1 system. Riding the LRT from end to end easily gives passengers a bird’s eye view life in the five (5) cities below the rail namely: Parañaque, Pasay, Manila, Caloocan, and Quezon City. which spans Quezon City, Caloocan, Manila, Paranaque, and Pasay.

All stations after all are strategically located, stopping exactly where points of interest are just within a few steps, or at the most a short ride using other trademark transportations of Manila, like the jeepney, tricycle, or even the age-old calesa.

The LRT route from Baclaran to Central Terminal officially opened on December 1, 1984; with the second half—from Central Terminal to Monumento, inaugurated a few months later on May 12, 1985. Finally, by 2010, the LRT expanded to connect Roosevelt Avenue in 2010.

Most people prefer to use the LRT compared to other modes of public transportation because it is cheaper and there is no traffic. The fare for a single journey ticket for instance, from Monumento to Baclaran cost more or less $.67 or Php30.(rappler)

The Bonifacio Monument in turn, is created by national artist for sculpture, Guillermo E. Tolentino after his design won against 12 other artists.

The Monument or Monumento is composed of a 45-foot granite pylon made from Germany and 23 bronze figures from Italy. The Monument was constructed for 3 years. It stands on an octagon, whose sides represent the first eight provinces that revolted against Spanish rule.

The Monument is located in Caloocan City, where a number of milestones for the Philippine revolution happened.