He is a National Artist for Sculpture. 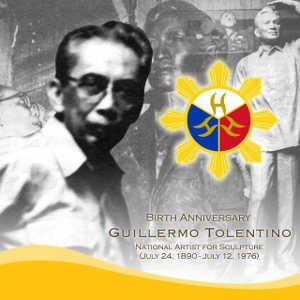 Guillermo Estrella Tolentino is a product of the Revival period in Philippine art.

Returning from Europe (where he was enrolled at the Royal Academy of Fine Arts, Rome)
in 1925, he was appointed as professor at the UP School of Fine Arts where the
idea also of executing a monument for national heroes struck him.

The result was the UP Oblation that became the symbol of freedom at the campus.

Acknowledged as his masterpiece and completed in 1933, The Bonifacio Monument in
Caloocan stands as an enduring symbol of the Filipinos’ cry for freedom. (NCCA)

The Order of National Artist is the highest national recognition given to
Filipino individuals who have made significant contributions to the development
of Philippine Arts.

The Order of National Artists (Orden ng Pambansang Alagad ng Sining) is the highest
national recognition given to Filipino individuals who have made significant
contributions to the development of Philippine arts; namely, Music, Dance,
Theater, Visual Arts, Literature, Film, Broadcast Arts, and Architecture
and Allied Arts.

The order is jointly administered by the National Commission for Culture and
the Arts (NCCA) and the Cultural Center of the Philippines (CCP) and conferred
by the President of the Philippines upon recommendation by both institutions.

Some of the privileges of being a national artist such as the National Artist for
Visual Arts are the following: Lifetime emolument and material and physical benefits comparable in value to those received by the highest officers of the land such as: