Four (4) original pilipino music composition are required to be played by all
radio stations in the Philippines with musical format programs.

Executive Order Number 255 which was signed by President Corazon Aquino
on July 25, 1987, provides that all radio stations in the Philippines with musical format programs must broadcast a minimum of four (4) OPM or original Pilipino music compositions in every clock-hour. 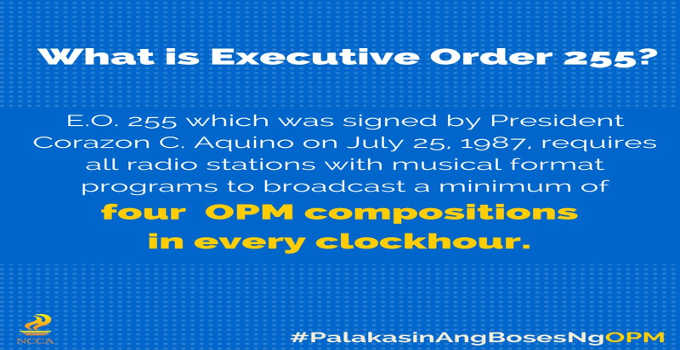 Original Pilipino Musical Composition shall refer to any musical composition created by a Filipino, whether the lyrics be in Filipino, English or in any other language or dialect.

This is good to give an opportunity for the Filipino Music Industry to thrive.

The reason for the law is that radio programs with musical formats allot very limited playing time to original Pilipino music.

To remedy this situation, the law will ensure the growth of the local music industry and the airplay of original Pilipino music in Philippine radio stations will be increased.

Executive Order Number 255 was based on the Philippine constitutional provision which provides that the State is constitutionally mandated to conserve, promote and popularize the nation’s historical and cultural heritage and resources, as well as artistic creations, and to give patronage to arts and letters.

Any franchise holder or operator of a radio station which fails to broadcast the minimum number of original Pilipino musical compositions in every clock-hour of a program with a musical format shall be fined in the amount of P100.00 per violation.

The National Telecommunications Commission may, after due hearing, suspend or cancel the Certificate of Registration and Authority to operate of any radio station in the event of repeated violations of this Executive Order or its implementing rules and regulations.

The National Telecommunications Commission (NTC) is in charge of promulgating the necessary rules and regulations to implement Executive Order Number 255.