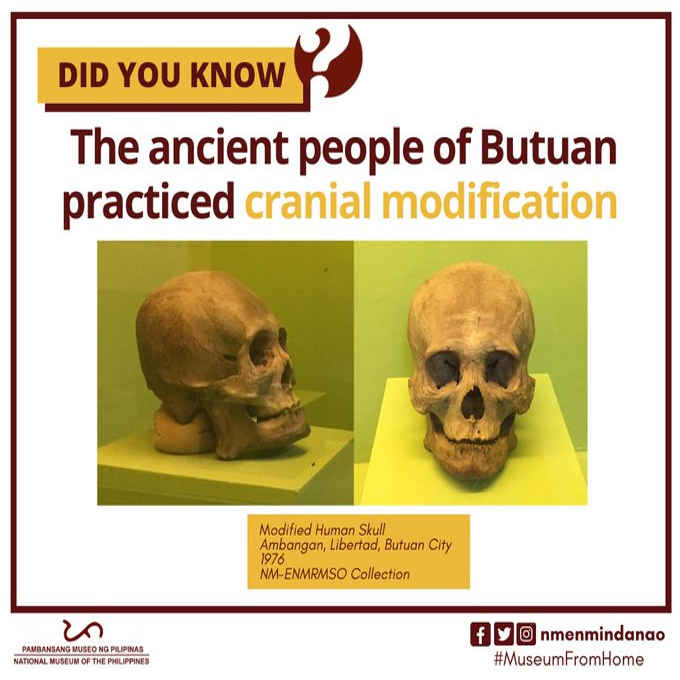 Did you know that in ancient times, people with deliberately flattened foreheads or elongated heads are considered beautiful? And practice is said to be limited to the elite?

In the 1970s, the #NationalMuseumPH conducted archaeological excavations in Ambangan, Libertad, Butuan City where they unearthed human skeletal remains with artificially modified crania. Based on the associated Chinese ceramics, these burials suggest a probable date of 14th-15th centuries (Cembrano 1998).

Similar burials with modified crania were also encountered in Banton (Romblon), Bohol, Cebu, and Samar. Cranial modification in all the sites involved the reshaping or molding of the head particularly the forehead and back area with the use of boards and bindings at an early age to achieve the desired form of a slanting and elongated cranium. Ethnographic and historic sources indicate that the practice of Artificial Cranial Modification (ACM) typically begins within the first few days after birth and probably until six months (O’Loughlin 2004).

The reason behind this practice of ACM is usually associated with social status. Using as a basis the artifacts recovered in the burials which included gold ornaments, beads, metal tools, trade ware ceramics, and the like, the deceased belonged to the elite of the community as these objects were only available to those who can afford them. Even today, among the Tausug of Jolo, an elongated head is a sign that the individual belongs to the upper class.