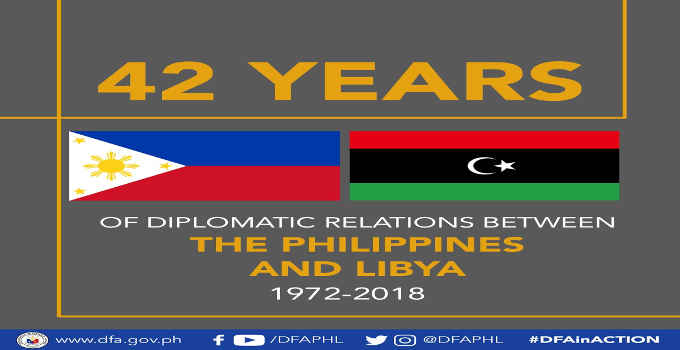 Today, November 17, we celebrate 42 years of the establishment of formal diplomatic
relations between the Philippines and Libya.

The Philippines and Libya established diplomatic relations on November 17, 1972.

Libya is a country in North Africa, bordered by the Mediterranean Sea to the north,
Egypt to the east, Sudan to the southeast, Chad and Niger to the south and
Algeria and Tunisia to the west.

Libya currency is called Libyan Dinar and the official language is Arabic.

About 97% of the population in Libya are Muslims.

The flight time from Tripoli, Libya to Manila, Philippines is 13 hours and
15 minutes.

This assumes an average flight speed for a commercial airliner of 500 mph, which
is equivalent to 805 km/h or 434 knots. It also adds an extra 30 minutes for
take-off and landing. Your exact time may vary depending on wind speeds.

The calculation of flight time is based on the straight line flight distance
from Tripoli, Libya to Manila, Philippines (“as the crow flies”), which is
about 6,670 miles or 10 734 kilometers.

The Philippine Embassy in Tripoli has an official website at  http://tripolipe.dfa.gov.ph/.

The Libyan Embassy in the Philippines is located at 2056 Lumbang cor.Caballero
Streets Dasmariñas Village, Makati City,Philippines.The telephone number is
(+63) 2 817-7331 to 32.

Department of Labor and Employment Secretary Silvestre Bello III announced
that the Governing Board of the Philippine Overseas Employment Administration
(POEA) is poised to approve a resolution imposing a total deployment ban to Libya.

The total deployment ban to Libya, meanwhile, was an offshoot of the Alert Level
3 raised by the DFA due to the escalation of violence in the Arab state.

“If there is an Alert Level 3 from the DFA, an automatic deployment ban is imposed.
If we will allow the OFWs to leave, we will just be exposing them to danger,”
Undersecretary Jacinto Paras said.

Paras meantime urged OFWs stranded in Libya who wish to come home and be
repatriated back to the Philippines to immediately seek assistance from
the Philippine Overseas Labor Office (POLO) or with the officers from the
Overseas Workers Welfare Administration (OWWA).