Today, September 30, we celebrate five years of the establishment of formal diplomatic
relations between the Philippines and Mauritania. 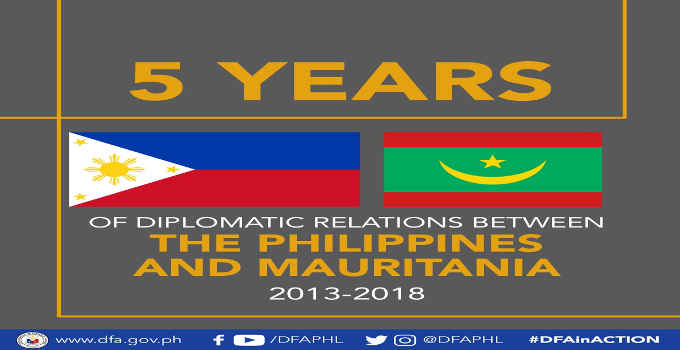 The Philippines and Mauritania established diplomatic relations on September 30,2013.

Mauritania is a country in Northwest Africa. It is the eleventh largest country in Africa and is bordered by the Atlantic Ocean to the west, Western Sahara to the north and northwest, Algeria to the northeast, Mali to the east and southeast,  and Senegal to the southwest.

Mauritania is a former French colony. Almost all inhabitants are Muslims and speak
arabic. French is widely used in the media and among educated classes.

The Approximate flight duration time for a non-stop flight from Manila, Philippines
to Nouakchott, Mauritania is 18 hours and 7 minutes.This is the approximate flight
duration times. The actual flight times may differ depending on the type and speed
of aircraft.

Mauritania is one of the countries which were not certified by the Department of Foreign
Affairs (DFA) as compliant to Republic Act 10022 or the Amended Migrant Workers Act.
OFW’s can not be deployed in this country.