Finally, it’s a law! RA 11055, the Philippine ID System Act has been signed into law by
President Duterte, 17 years after I first filed the bill in the 12th Congress. After
5 Congresses and 2 Presidential Administrations, it’s now officially established, Ruffy
Biazon said.

Representative Gary Alejano of Magdalo partylist on the other hand said, 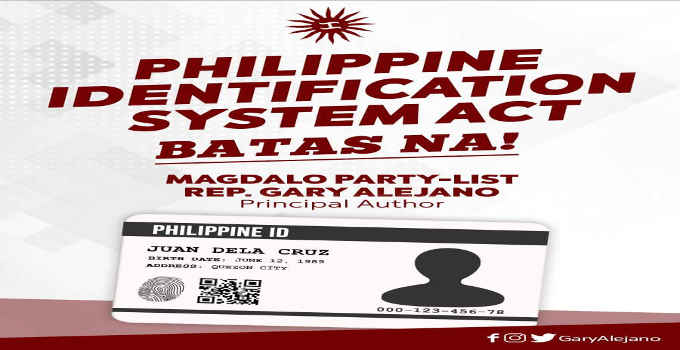 Senator Lacson also said that with the signing of the measure into law, Filipinos will
now have an easier time transacting with the government and with private entities.

Lacson said the measure aims to institute a single official identification for all
citizens and foreign residents in the country.

Currently, he noted there are 33 different forms of “functional” identification cards
issued by various government agencies – a situation that may lead to “duplication of
efforts, wastage of resources, and uncoordinated identity approaches.”

Lacson, who headed the Philippine National Police from 1999 to 2001, said the national
ID system could also help deter criminality and terrorism by facilitating the processes
of apprehension and prosecution.

Under the bill, a foundational ID system, dubbed PhilSys, will be in place. It will
have three components: the PhilSys Number (PSN), PhilID and PhilSys Registry.

PSN is a randomly generated, unique and permanent identification number for each
individual, to be incorporated in all identification systems of government agencies.
It will remain with the person even after death.

PhilID is a non-transferable card with the PSN and basic information.

The Philippine Statistics Authority is mandated to act as the PhilSys Registry.

Under the national ID law, the PSA will collate the full name, sex, birthdate, address,
citizenship and blood type of Filipino citizens and encode them in a centralized database.

The law ensures that the individual’s right to privacy is protected.

As provided under RA 11055, information may only be released when the registered
person has given his or her consent, specific to the purpose prior to the processing;
when the compelling interest of public health or safety so requires, provided the
risk of significant harm to the public is established and the owner of the information
is notified within 72 hours of the fact of such disclosure; upon order of any competent
court; and when a registered person requests from the PSA access to his or her
registered information and record history, subject to the guidelines and regulations
to be issued by the PSA. (PNA)