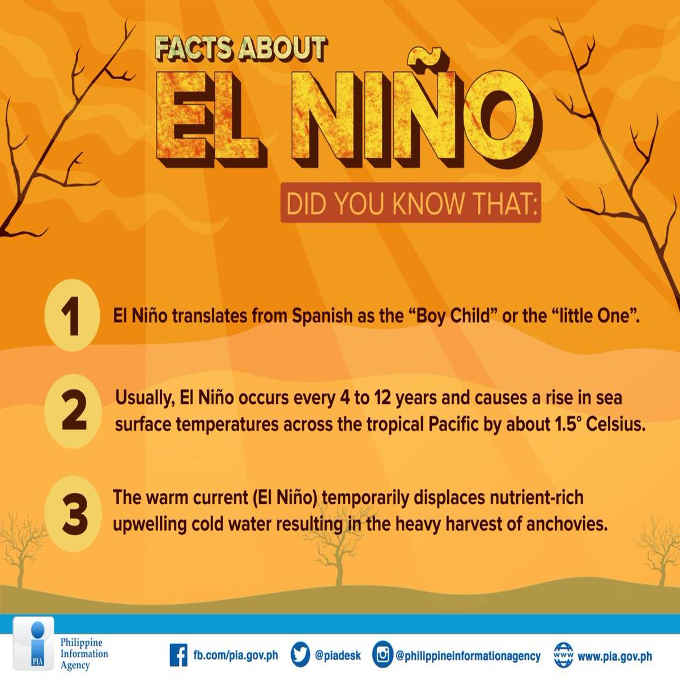 El Niño in the Philippines | PIA

Get to know some facts about El Niño , the phenomenon which we are currently experiencing in the Philippines.

Facts About El Niño in the Philippines

Did you know that

1. El Niño translates from Spanish as the “Boy Child” or the “Little One”.
2. Usually El Niño occurs every 4 to 12 years and causes a rise in sea surface temperatures across the tropical pacific by about 1.5 degrees Celsius.
3. The warm current (El Nino) temporarily displaces nutrient-rich upwelling cold water resulting in the heavy harvest of anchovies.

Are you feeling the heat?

Here are some tips on how we can deal with the hot and dry season.

How to deal with El Nino?

1. Wear light-colored clothing that can help you move freely and feel cooler.
2. Avoid exposing yourself to the sun too long to avoid skin diseases and heat stroke.
3. Drink lots of water to avoid dehydration.
4. Conserve water.

You might ask, What is the economic effect of El Nino in the Philippines?

The National Economic and Development Authority (NEDA) is optimistic that El Niño will barely affect the inflation rate, which had finally settled within target.

Socioeconomic Planning Assistant Secretary Mercedita Sombilla said on Monday, March 25,  that while El Niño has damaged some rice fields, it would not have a major impact on the country’s rice production. Should there be any effect, Sombilla said it would only delay planting and harvesting.(rappler)