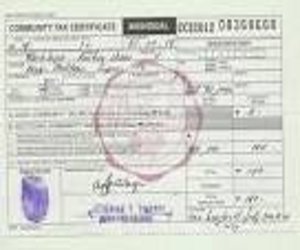 The modus operandi of selling fake cedula or community tax

certificate was discovered by the Manila Police District.

government offices such as the NBI and the PRC.

The local government of Manila said that this fake cedula is

The first entrapment operation to catch those who are selling

headquarters where NBI clearance is issued.

The police officers dressed in civilian attire posed as a

Once the marked money was received by the seller, the police

officer buyer signaled the members of his team to make the

The supplier of the fake cedula was separately arrested near

the main gate of the National Bureau of Investigation at

A separate buy-bust operation was conducted at Professional

Regulation Commission at Morayta. One of those arrested

pointed the names and whereabouts of the other members of

According to the Manila City Hall, instead of the City’s

income increasing, the fact is in the opposite because of’

vigilant in verifying the authenticity of the cedula they

present especially those who are applying for the health card.

Falsification of Public Documents and Estafa will be filed

by the Police before the office of the Prosecutor.