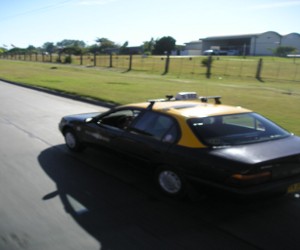 The Modus Operandi of the gang is to wait for a taxi to victimize. Once a particular taxi is determined, they will flag it and ride in the taxi.

Once the taxi reached a less densely populated and dark area with lots of possible exit points, the Laglag Taxi Driver Gang members will announce the robbery or hold-up.

The Laglag Taxi Driver Gang members will order the driver to get out of the taxi and drive the taxi to a certain place of their choosing.

Two suspects were seen getting out of the taxi.

The investigation by the police revealed that the taxi was carjacked in Roosevelt Boulevard.

The suspects were identified by the Manila Police Department Station 1 as Gregory Taburada who drove the taxi and Allan Samson who rode at the back of the carjacked taxi.

The Manila Police Department conducted a hot pursuit operation against the Laglag Taxi Driver Gang and they were successfully arrested by the police early morning in a place called Happyland.

The suspect Gregory admitted the crime and claimed that he did it because he has no job.

The second suspect Allan said that he joined the gang because of the same reason as Gregory.

An unlicensed local revolver, duck-tape, rope, and shabu, a prohibited drug were recovered from the suspects.

The arrested Laglag Taxi Driver Gang member will now be delivered to the nearest police station or jail and will be charged before the office of the prosecutor.