Home  »  Lifestyle   »   Who is the Founder of the Girl Scout of the Philippines? 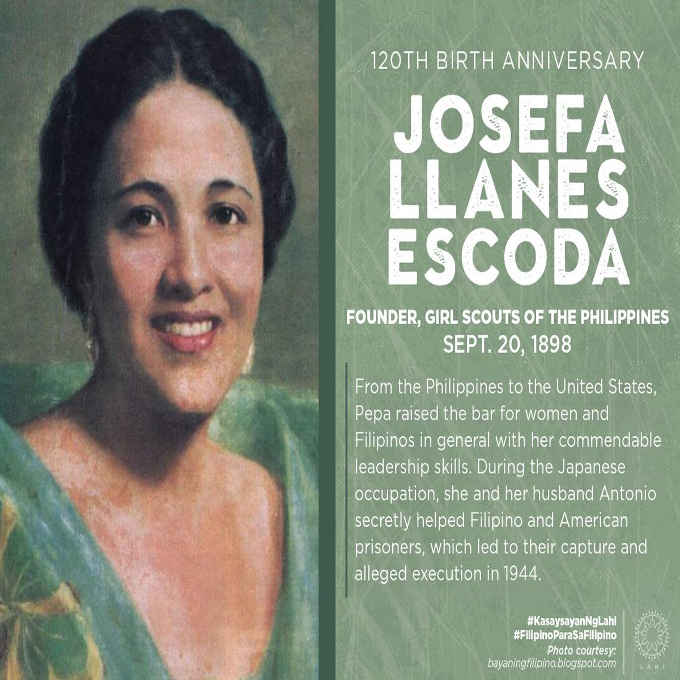 Founder of the Girl Scout of the Philippines | Image Credit: Lahi

The founder of the Girl Scout of the Philippines is Josefa Llanes Escoda.

From the Philippines to the United States, Josefa Llanes Escoda, whose nickname is Pepa, raised the bar for women and Filipinos in general with her commendable leadership skills.

As the eldest of seven children, she had to help her mother take care of her siblings after the death of her father in 1918, all while studying to obtain a high school teacher’s certificate from the University of the Philippines.

In 1939, she went to the US to learn girl scouting and came back to organize the organization with Pilar Hidalgo Lim, who was, then, the national president of the National Federation of Women’s Clubs. On May 26, 1940, the GSP charter was enacted through Commonwealth Act No. 542 under the administration of President Manuel L. Quezon. During the Japanese occupation, Escoda and her husband were notoriously known for their smuggling activities to bring aid, medicine, and food to Filipino and American war prisoners in the concentration camps. Her heroism saved lives and was one of the pioneering movements for women empowerment. (asiatatler)

During the Japanese occupation, she and her husband, Antonio, secretly helped Filipino and American prisoners, which led to their capture and alleged execution in 1944.

Escoda, a native of Dingras town in Ilocos Norte, was an active and dedicated social worker. She was also an advocate of women’s right to suffrage at a time when only men were allowed to vote. (abs-cbn)

Aside from founding the Girl Scouts of the Philippines, she also founded the Boys’ Town in Manila for the underprivileged boys of Manila and the National Federation of Women’s Clubs.

Escoda, dubbed as the “Florence Nightingale of the Philippines,” played a key role in providing aid to the prisoners of war during the Japanese Occupation period.

Josefa Llanes Escoda, the founder of the Girl Scout of the Philippines was born on September 20, 1898, to Mercedes Madamba and Gabriel Llanes. She passed away during the Japanese occupation.