She can be spotted in a cage at the Ninoy Aquino Parks and Wildlife  Center in Quezon City.

Girlie is estimated to be 38 yrs old, with her right eye wounded by a slingshot used for her capture in Bukidnon. She was the natural pair of Tsai and was the first Philippine Eagle in captive breeding history to lay a fertile egg, which unfortunately did not hatch. 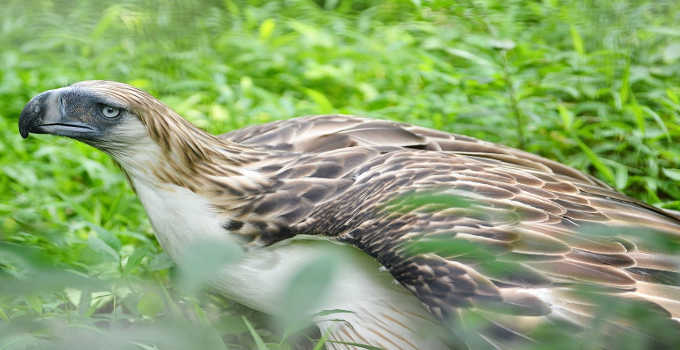 It is the largest eagle in the world. This magnificent bird proudly stands at one ( 1 ) meter in height and has a wingspan of about two (2) meters. Its head is adorned with pointed crown feathers known as “crest” and it has a massive arched beak.

The Philippine Eagle has been given mighty names in the various regions such as “Haring lbon”, ” Agila”, “Mamboogook”, “Garuda”, “Banog”, “Asinmanonoy”, and “Biok”.

The female Philippine eagle is sexually mature at age five (5), the males at seven (7).

The female lays only one (1) egg every two (2) years. Nests, measuring 1-2 meters wide, are built on large trees usually found along steep slopes and ravines. Both parents take turns incubating the egg for about 60 days. At 22 months, the young eagle leaves its parents’ home and searches for its own territory.

The Philippine eagle is endemic to the Philippines and is known to inhabit the forested areas of the Sierra Madre and the Cordillera Mountain Ranges of Luzon, Samar, Leyte, and Mindanao.

This critically endangered bird with a current population estimate of about 500 pairs throughout the archipelago faces the risk of extinction due primarily to the loss of habitat. If this persists, the young eagle would have no territories of its own to perpetuate its kind. Hunting of the species has also contributed to their declining population.

The Philippine Eagle was once known as the monkey-eating eagle because of earlier reports that it preyed solely on monkeys. However, this bird actually sits on top of the food chain, with other animals such as flying lemurs, squirrels, snakes, monitor lizards, bats, and owls forming part of its diet.