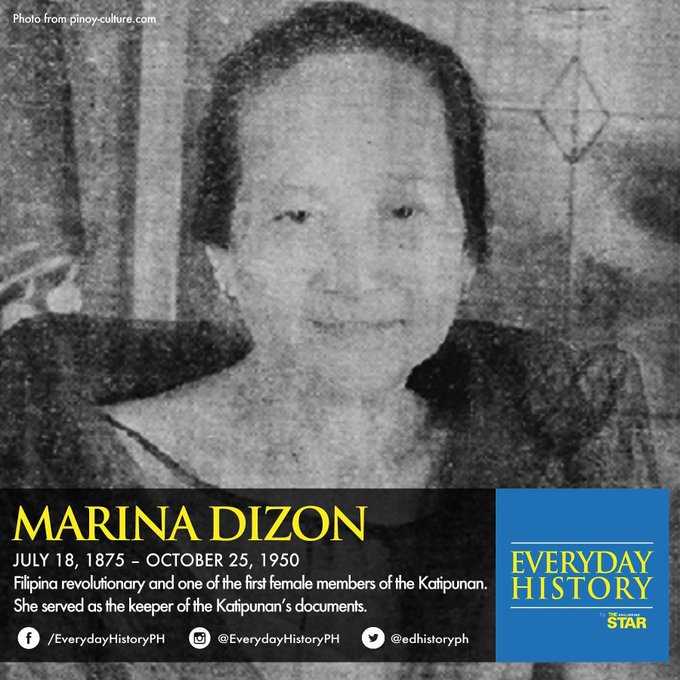 On this day, July 18, in 1875, Filipina revolutionary Marina Dizon was born in Trozo, Manila.  She was one of the first women to join the Katipunan revolutionary secret society in 1893, is the daughter of its founding member Jose Dizon.

She married Jose Turiano Santiago, also a Katipunero. She served as the keeper of the society’s documents, which she burned following the Katipunan’s discovery in 1896.

Following her husband’s arrest, she sold her jewels to pay for his release. They lived in  Tarlac after the revolution and she died on Oct. 25, 1950.

On July 18, 1875, Marina Dizon y Bartolome, Heroine of the Philippine Revolution and one of the first women initiated into the Katipunan, was born in Trozo in Manila, to Jose Dizon, one of the thirteen revolutionary martyrs of Bagumbayan and Roberta Bartolome. She was barely eight months old when her mother died. Her aunt Josefa Dizon, Emilio Jacinto’s mother took care of her.

She obtained her early education in a private school conducted by Maestro Timoteo Reyes (also called as Maestro Tong). Later she enrolled in a public school under Doña Aniceta Cabrera, where her future husband Jose Turiano Santiago happened to be one of her schoolmates. She studied music, painting and modeling and became an accomplished singer and declaimer. She was also a guitarist and violinist of the Trozo Comparsa Band. She wanted to be a teacher but her father frowned on the idea.

One night in 1893, she was accompanied by her cousin, Emilio Jacinto to the house of Don Restituto Javier on Oroquieta Street. There in the presence of Gregoria de Jesus, the young wife of Bonifacio, Josefa and Trinidad Rizal and their nieces, Angelica Lopez and Delfina Herbosa, Marina was initiated into the Katipunan. The initiation was presided by the Supremo, Andres Bonifacio.

A very active member of the organization, Marina presided over initiation rites for women, kept the records, and acquainted new members with the constitution and teachings of the Katipunan. She would always remind the members: “Be cheerful at all times; do not show fear of impending rebellion. Be prepared to be orphans and widows some day. Be brave and carry on”. She led the women in dancing and singing acts to distract the attention of the Spanish patrol units when the Katipunan have meetings or gatherings.

She was elected secretary of the Katipunan women’s chapter along with Josefa Rizal, president; Gregoria de Jesus, vice-president; and Angelica Lopez as fiscal.

Even within a risky situation and secrecy of their work, a love bloomed between Marina and Jose Santiago Turino, an accountant in a business firm, a childhood friend when they met again in the Katipunan.

On September 16, 1894, Marina and Jose were married in Binondo Church.

It was on August 1896, when the Katipunan was discovered. Her father was executed in Cavite and her husband Jose Turiano was arrested and imprisoned. To avoid having the records of the Katipunan fall to the hands of the authorities, she burned them. She sold her valuables to raise money to bribe the guards in order to let her visit her husband in jail. She found temporary peace when, on September 11, 1897, her husband was released.

The American occupation in 1899 forced Marina and her family to transfer residence to Maycauayan, Bulacan. They moved to Tarlac, Tarlac when the hostilities ended. Jose and Marina would be separated when Marina left for Bamban and Jose worked as an accountant in Manila. In Manila Jose was suspected as a revolucionario and an order for his capture was issued by the Americans. Avoiding arrest, Jose left for Hong Kong. He and Marina, however, were reconciled when he came back later to the Philippines.

Dizon was widowed during the Second World War.

In the twilight years of her life, she lived with her unmarried daughter in Caloocan. She passed away at the age of 75 on October 25, 1950. (kahimyang.com)