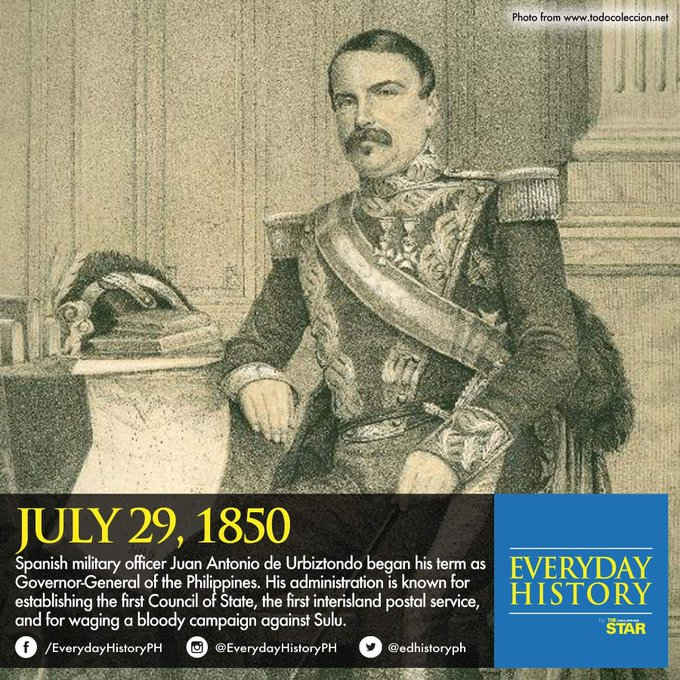 On this day, July 29, in 1850, Spanish military officer Juan Antonio de Urbiztondo began his term as Governor-General of the Philippines.

His administration is known for establishing the first Council of State called the Junta de Autoridades composed of himself, the Archbishop of Manila, the president of the Real Audiencia, and other officials of the colonial government.

Today, July 29, 2020, 499 Years Ago, the remnants of the Armada de Maluco under the command of Juan Carvallo encountered a fleet of junks off the coast of Borneo. In the ensuing battle, the Europeans captured the commander of the junks who happened to be the Prince of Luzon.

In his recounting of the aftermath, Antonio Pigafetta noted the disappointment and resentment the rest of crew bore against Carvallo who freed the captured prisoners after allegedly obtaining a substantial personal bribe in exchange. This later came to head when Carvallo was removed from his captaincy by the crew of the two remaining ships while they were in repairs at Cimbonbon Island.

The Prince of Luzon, son of the King of Luzon, was captured in his capacity as Chief of the Forces of the King of Burne (Borneo). According to Pigafetta, the Prince had just led a raid against a neighboring enemy settlement along the shore of Borneo when they were surprised by the appearance of the Spanish vessels. This interconnected web of services and alliances serves as an important indicator of the existence and growth of significant socio-economic and political systems within the archipelago which would become the Philippines. Around 50 years after this event, a Spanish fleet wound anchor in Manila Bay before the Kingdom of Maynilad led by Rajah Matanda who was a witness himself of the Spanish in Borneo.

The narrative was sourced from James Alexander Robertson’s translation of Antonio Pigafetta’s First Voyage Around the World (1906). (@nqcPhilippines)