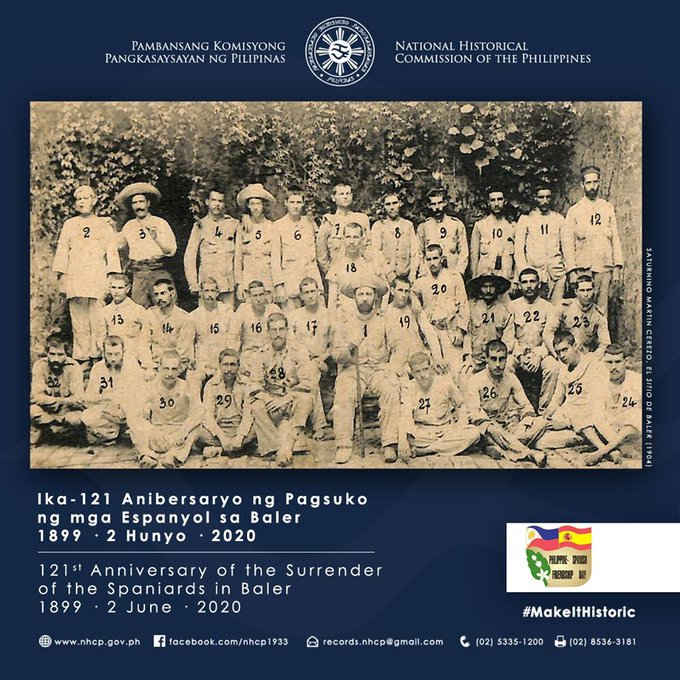 Today, June 2, 2020, is the 121st anniversary of the Spanish surrender in Baler church, after 337 days. They surrendered on June 2, 1899. They were the last of the Spanish forces in the Philippines. Filipinos admired their resolve. After the siege, President Emilio Aguinaldo granted them safe passage to Manila for them to go home to Spain.

On June 2, 1823, a group of Spaniards attempted to overthrow the Spanish colonial government of the Philippines.

These peninsular soldiers arrived in Manila in November 1822, together with new Governor-General Juan Antonio Martinez.

The successive Latin American Revolutions happening in the Spanish overseas territories led by creoles were among the reasons for this distrust.

Creoles, as well as the mestizos (Spanish-blood), also received insults and derisions from the peninsulares accusing them of being less patriotic because they were raised far from their mother (Spain).

Before he was sent to Mindanao, Captain Andres Novales, a Spaniard born in Mexico, surprised the authorities by seizing Intramuros at 11 p.m. on 1 June 1823.

He was able to muster an 800-strong force composed not only of creoles but also of mestizos (Spanish-blood), sangley mestizos (Chinese-blood), and native soldiers.

They occupied the Palacio del Gobernador (seat of the Spanish Governor-General, now COMELEC), the Casas Consistoriales (the state of municipal and provincial govt of Manila, also known as the Ayuntamiento or the Spanish-time Manila city hall, now the Bureau of the Treasury), and other government and military structures. They killed Mariano Fernandez Folgeras, the highest Spanish official next to the Governor-General. (The Governor-general was outside Intramuros when the mutiny happened.)

Novales said he declared himself emperor, implying the Philippines was already freed and under his power. However, Novales’ army was overpowered and quelled on 2 June 1823, 2 a.m. He and a number more rebels were tried at Fort Santiago. He was executed at Luneta on 3 June 1823.

Since then, the Spaniards heightened the security and became watchful of the creoles. Among those implicated civilian creoles was Domingo Roxas, a liberal whose wealth was later inherited by marriage by fellow libertarian Zobel de Ayalas.

Children and young creoles were also repatriated to Spain as a preventive measure. In December 1823, other conspirators were brought to America. (Project Saysay | @ProjectSaysay)

Today, June 2, 2020, The Republic of the Philippines and the Russian Federation celebrates 44 years of formal diplomatic relations.