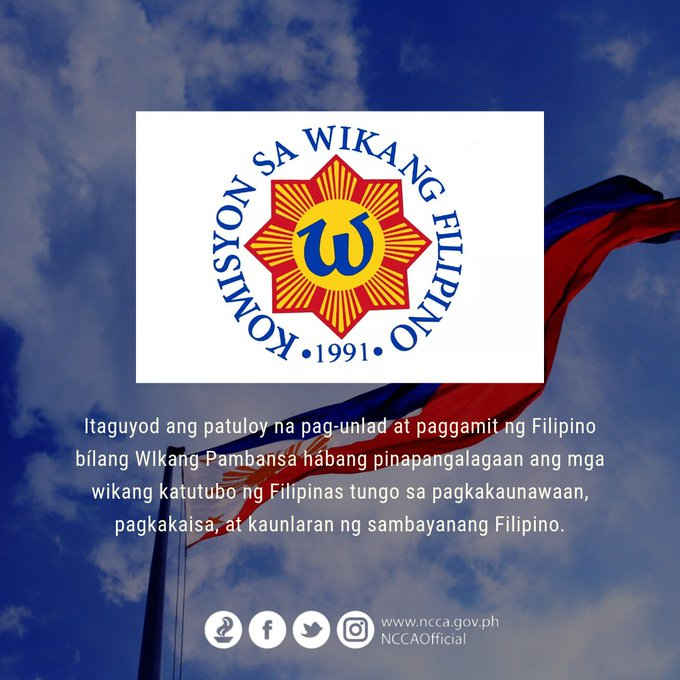 On this day, August 14, in 1991, Batas Republika Blg.7104 which created KWF (Komisyon sa Wikang Filipino) was signed into law.

This law shall be known as the “Commission on the Filipino Language Act.” This law was enacted pursuant to the mandate of the Philippine Consitution.

It is hereby declared to be a policy, of the Government to ensure and promote the evolution, development and further enrichment of Filipino as the national language of the Philippines, on the basis of existing Philippine and other languages. To this end, the Government shall take the necessary steps to carry out the said policy.

On this day in 1898, Maj. Gen. Wesley Merritt, commander of the US Eighth Army Corps, assumed office as the country’s first American military governor. His forces occupied Intramuros following the mock battle of Manila the previous day.

He, Commodore George Dewey, and Spanish Governor-General Fermin Jaudenes negotiated and planned the mock battle to enable Spain to have a graceful surrender while he gave Filipino forces under Emilio Aguinaldo specific instructions on which areas to attack to prevent them from occupying the Walled City.

Wesley Merritt only served as military governor until August 30, and after which, Maj. Gen. Elwell Otis replaced him. He requested to be relieved of the duty because he wanted to advise the American delegation that would negotiate peace with Spain in Paris, France. It was him who advised the American commissioners to annex the Philippines, believing that Filipinos would welcome American rule.

Wesley Merritt was born on June 16, 1836, in New York City. He was a graduate of the United States Military Academy at West Point and is a veteran of the American Civil War and the American Indian Wars before he was assigned to the Philippines to lead the US Eighth Army Corps and became the first American military governor of the Philippines. He died on Dec. 10, 1910. (http://everydayhistory.ph/)