Home  »  Government   »   Everything You Need To Know About Leila De Lima

Leila De Lima is the present Secretary of Justice of the Philippines. (She is now a Senator). 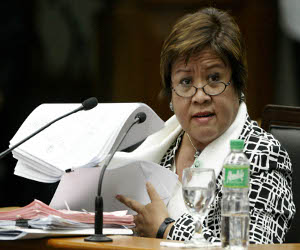 She is presently in the news allegedly meddling with the internal affairs of the powerful “Iglesia Ni Cristo” church.

How well do you know her?

She is the eldest daughter of the former Philippine COMELEC Commissioner Vicente de Lima and Norma Magistrado.

She has 2 sons named Israel and Vincent Joshua. She has 2 grandchildren.

Secretary De Lima’s civil status is vague. Her marriage is reported annulled a long time ago. She was formerly married to Plaridel Bohol (Source: Rappler and FilipinoScribe).

She is an alumnae of San Beda College where she studied from 1981 until 1985.

She was the class salutatorian when she graduated from the San Beda College of law in 1985.

She landed 8th place in the 1985 Philippine Bar Examination.

The Bar Exam is given once a year. The Examination is held every November in the University of Santo Tomas.

She took her elementary and high school education at La Consolacion College where she graduated Valedictorian or 1st in her class.

Before her appointment as Secretary of Justice on June 2010, Leila De Lima was the Chairperson of the Commission on Human Rights (CHR) from 2008 until 2010.

Prior to the above high-profile positions, Secretary Leila De Lima worked in the following offices and school:

Despite the objections and protests of the Iglesia Ni Cristo, a substantial number of people are urging her to continue the investigation into the alleged abductions of ministers of the said powerful church.

Leila De Lima is a bonafide member of the ruling Liberal party where the incumbent President belong. She is being rumored to be prepping for a senatorial bid but has repeatedly said she has no plans for 2016 yet. She said she is still awaiting for invitation from the ruling Liberal Party to join next year’selections.

On July 28, 2018, Liberal International will present the foremost human rights
award to Senator Leila De Lima in the Philippines.

More than 60 prominent liberal politicians from 30 countries have signed a statement calling for the senator’s immediate release from prison and the
dropping of fabricated charges against her.