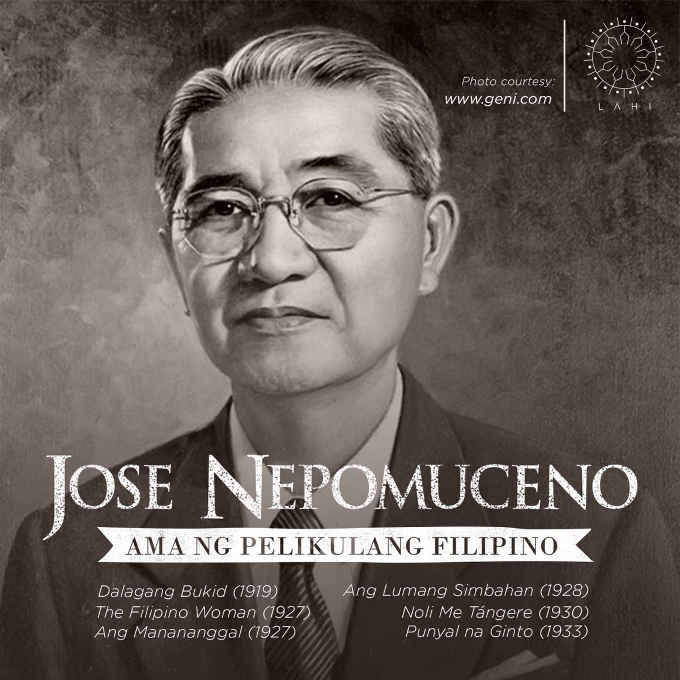 Jose Nepomuceno is the father of Filipino films.

Among his well-known films includes:

He established the first full Filipino motion picture company in 1917 amidst all the multi-national movie producing companies operating at that time.

Don Jose Nepomuceno was born on May 15, 1893, in a Spanish-type mansion on Regidor St.  (now Quezon Blvd.), fronting Quiapo Church. His father was Jose Nepomuceno y Romero of  Binondo, Manila; his mother was the former Teofila Zialcita y Torres of Orani, Bataan.  Jose had an only brother named Jesus who was married to Lucila Pecson.

For some time, the Nepomucenos lived in Quiapo, Manila (in front of the old church). There is, at present, a street named in his honor (J. Nepomuceno). This street, eight years ago, was Tanduay St.

Don Jose inherited his artistic proclivities and business interest from his father, while the virtue of hard work, patience, and perseverance was inherited from his mother. The family business of the Nepomuceno’s was mostly jewelry and cattle-raising.

Don Jose studied at San Beda College. He was able to finish a course in Painting and Electrical Engineering. A photographer by self-study, Don Jose’s knowledge of photography was enhanced by his experience in working with a priest who was in charge of taking pictures for a school annual. Don Jose used to collect stamps like a philatelist. He would paste the stamps in an album and sell it to his classmates. From selling beautifully-designed stamp albums, Don Jose was able to earn extra money.

As a student, Jose was good at improvisations and contraptions. He learned the art of set and designing props as well, at an early age. His services were utilized at various school programs, convocations, and the like.

Before Don Jose embarked on movie production, he established himself in local picture-taking as very innovative and inventive. Consider the following:

He was the first local photographer to take pictures at night. This he did by designing his own transformers for his arc lamps by using big jars and putting water with salt and colored galvanized iron into them.

He was the official photographer for beauty contests, fairs, carnivals, and even official functions of the government.

The concept of production design and art direction for the movies was first applied and put to use in the photography studio of Don Jose. Many of his customers used his sets as background for their picture-taking.

On May 15, 1917, Don Jose started his movie career. He bought his equipment from Yearsley and Gross and from other foreigners who came here to make movies. To add to his capital, he even sold his studio at Plaza Goiti. Don Jose first started as a documentarist. The first documentary film he did was the funeral of the first wife of Sergio Osmeña, Sr. in Cebu. Being an accredited correspondent of Pathe and Paramount News Hollywood, Don Jose was, therefore, able to have his documentary films or newsreels shown abroad.

Don Jose also took pictures of Pacho Villa’s wife. The newsreel which featured a background of Pacho Villa as World Flyweight Champion was in every country where Paramount pictures were being shown.

Paramount News also employed Don Jose to cover the terrible earthquake in Japan. In the film, Don Jose dramatized effectively the effects of the earthquake. With the help of the Bureau of Commerce, Don Jose filmed several industries in the country like copra production, tobacco-raising, coconut-planting, buntal hat-making, and the like.

Don Jose was also the first to produce cinema commercials when he incorporated his outfit with the Administracion Technica Industrial Cinematografica on Aug. 20, 1940.

Don Jose Nepomuceno is best known today for producing the first all-Filipino picture in 1919 called Dalagang Bukid from the original zarzuela written by Don Hermogenes Ilagan. Dalagang Bukid was subtitled in Spanish and English. The main leads were Atang de la Ramaa and Marceliano Ilagan. It was followed by La Venganza de Don Silvestre (1920) with Atang de la Rama and Marceliano Ilagan again in the lead; Capullo Marchito (1920) with Luisa Acuña in the lead; Hoy O Nunca Besame (1923) with Juanita Angeles and Andres Fernandez in the lead. The other significant films were Punit na Bandila (by Fausto Galauran); Hampaslupa; Kambal; Ang Punyal na Ginto (the first Tagalog talkie from Antonio Sempio’s novel) with Alma Bella and Carlos Padilla in the lead; Dr. Kuba and Makata at Paraluman.

In 1958, Don Jose went to Hollywood to study color film. He did not, however, live long enough to transport his knowledge to the Filipinos. He had a heart attack and was brought back to the Philippines on a hospital boat. On December 1, 1958, Don Jose passed.

In the United States, Don Jose was officially registered as the First Filipino Cinematographer and the pioneer of Philippine movies. True, he did not receive numerous trophies and awards as proof of his excellence, but people will long remember him for his contribution to the Philippine cinema. In 1972, a posthumous award was given to Don Jose for his contributions to the cinema. The award was Patnubay ng Kalinangan.pelikulaatbp.blogspot.com